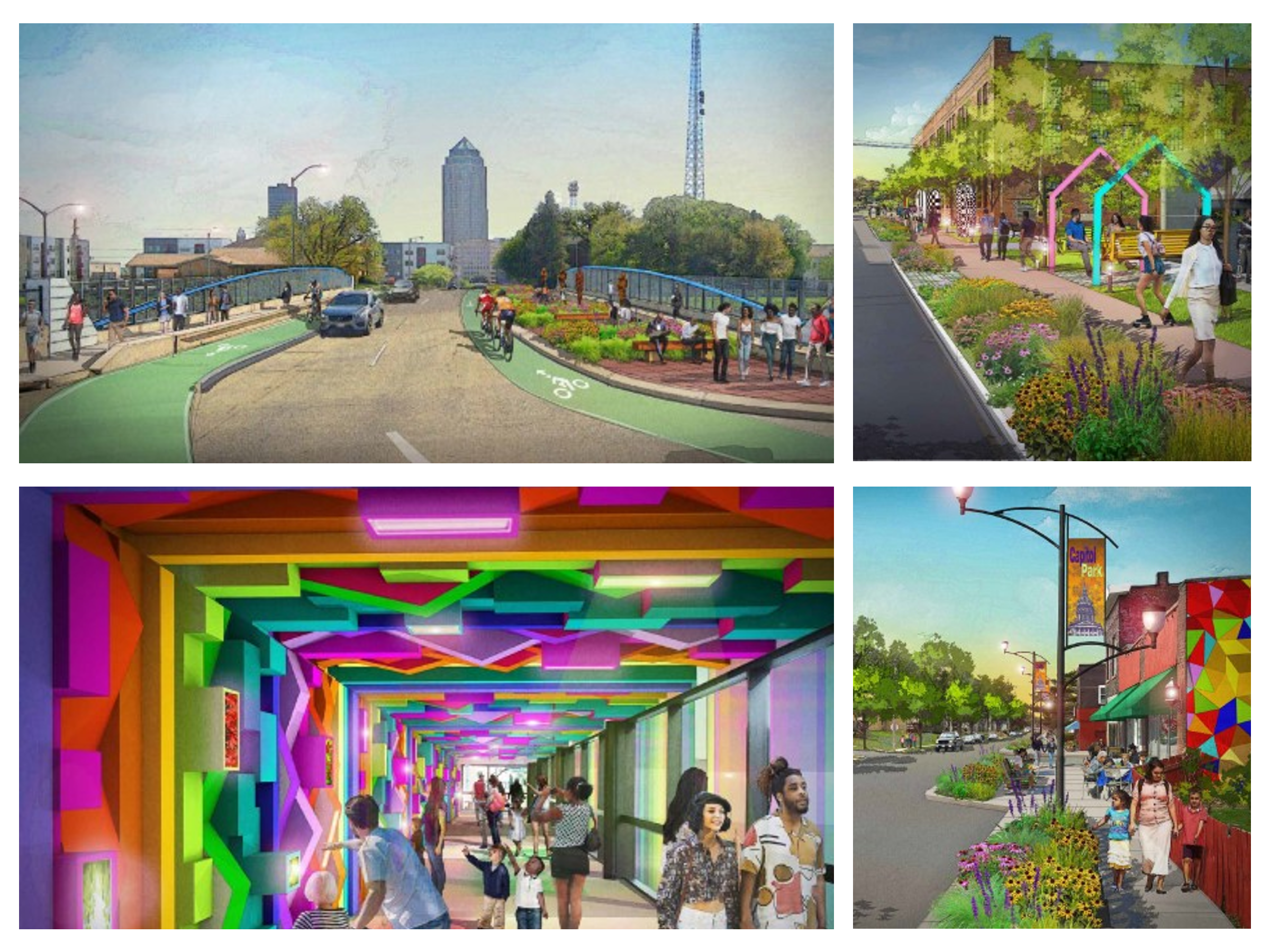 Renderings, starting at top left, show a redesigned Ninth Street running south toward downtown; addition of green spaces around the downtown core; reimagined walkways that include public art; and reinvestment in the neighborhoods surrounding the city center. Architectural rendering by RDG Planning & Design

Reimagining the downtown Des Moines gateway system, creating corridors between downtown and surrounding neighborhoods, and building stronger neighborhoods are among the initiatives proposed to be included in a new vision and plan. of action for the city’s central business district.

The initiatives were discussed in a recent breakout session at the Iowa Commercial Real Estate Association’s annual expo.

Downtown DSM: Future Forward is a 10-year vision and action plan led by a Steering Committee of the Greater Des Moines Partnership. The plan was described as a community effort to help position the region for short-term economic recovery from the pandemic and long-term economic vitality.

A total of six future initiatives were identified, said Carrie Kruse, vice president of downtown development for the partnership, during the breakout session. The other three are the Green Ring, the Inner Circle, and the Stadium Quarter.

Here is a summary of the six initiatives:

Connected corridors: An effort to better connect the city center to the surrounding neighborhoods. One idea that has been discussed is to reduce the number of vehicular lanes on the Ninth Street Bridge over Highway 235 and create bike lanes and wide pedestrian paths between the neighborhoods and East Village. An architectural rendering shows gardens on one side of the bridge, which has no entry or exit ramps to I-235.

“There’s definitely an opportunity … to make this a more attractive way to navigate to and from downtown and in our neighborhoods,” Kruse said.

Green ring: An effort to make more obvious connections between downtown amenities such as the Pappajohn Sculpture Garden and the future professional soccer stadium and Gray’s Lake. The green ring would surround the city center, bringing green space to the area.

“We want to create a more interesting and engaging experience for people moving from place to place,” Kruse said.

Reinventing gateways: Downtown Des Moines’ walkways, which are nearly 50 years old, are “tired, dark and dingy,” Kruse said. Heated discussions took place over whether to demolish the 4-mile system or reinvest in it, she said. “It was decided that it was too much equipment invested to back down or give up.”

Instead, the vision calls for making walkways more attractive with different types of artistic features, lighting, and light paintings. “We want to do [the skywalks] more of a destination, a convenience for the community more than just a way to get from point A to point B in the winter.

Inner circle: Creation of a mixed-use circle near the city center by recreating Keosauqua Way in an area that is more walkable and making it easier to travel by vehicle.

Kruse emphasized that the initiatives are conceptual.

“The goals of the vision plan are for these conceptual projects to be prioritized and budgeted for over the next decade,” she wrote in an email.

The group hopes to complete the visioning process for the plan by the end of the year, Kruse said. The final version should be approved by the steering committee and the city of Des Moines, she said.

Related article: Learn about the history of the gateway system reading the Elbert Files: Skywalk stories.