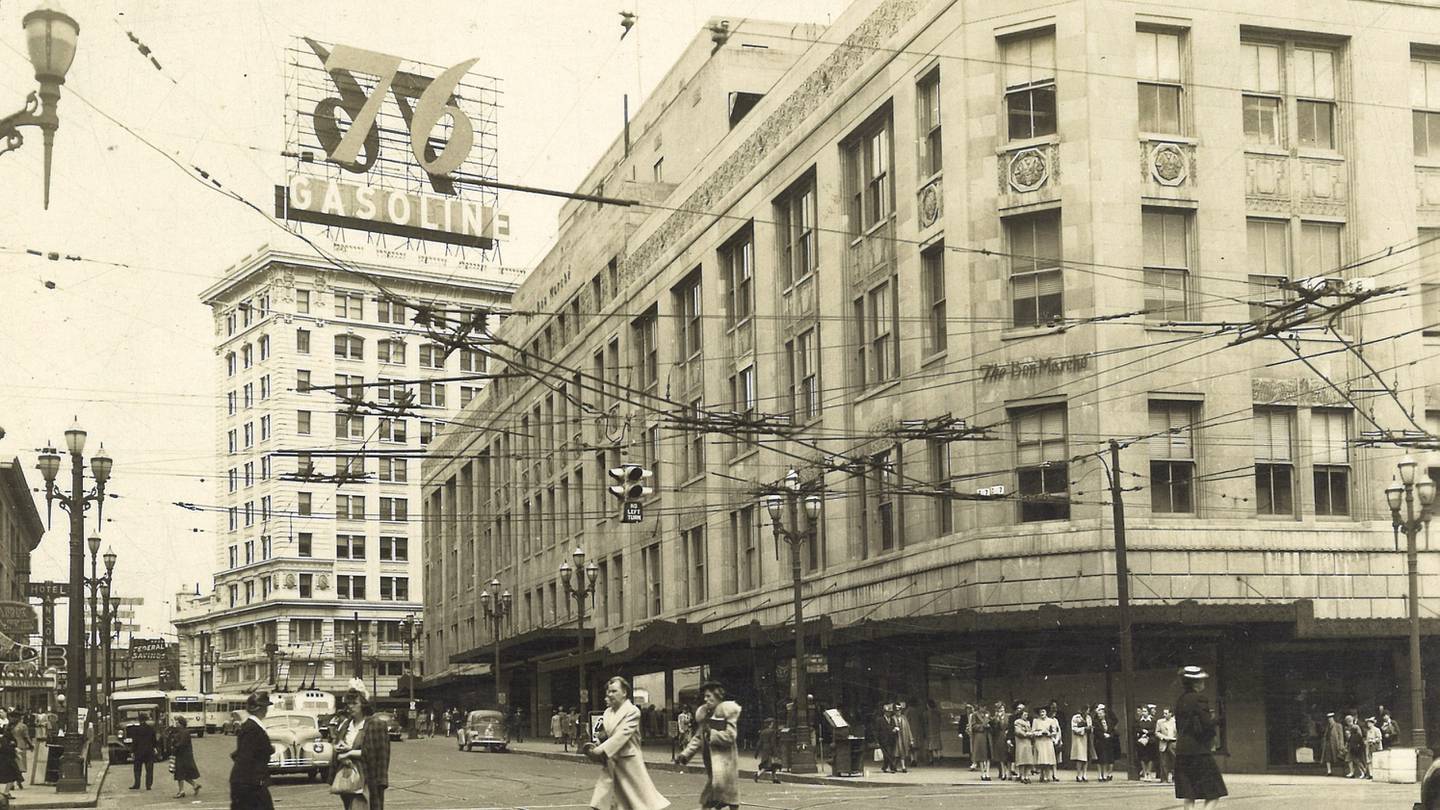 The following is a HistoryLink.org essay by James R. Warren:

In 1890, Josephine Nordhoff (d. 1920) and her husband, Edward Nordhoff (1858-1899) arrived in Seattle and used their savings of $1,200 to start a dry goods store. This small retail store, which they called Le Bon Marché, became one of the most famous department stores in the Pacific Northwest.

Edward Nordhoff, originally from Germany, lived in Paris in his youth. He worked for the Louvre department store in Paris, but he greatly admired the service, integrity and merchandising strategy of rival Le Bon Marché Maison Boucicaut. His ambition was to open a store that would mimic the standards set by the Bon.

Nordhoff immigrated to the United States in 1881. While running a department store in Chicago, he met Josephine Brennan, who worked in the sales room. She was 16 and he was 29 when they married in 1888. Two years later they moved to Seattle with their baby, Eleanor.

Arriving in Seattle a year after the Great Fire of 1889, the couple found rental space was scarce. They rented a small storefront at 1st Avenue and Cedar Street (in the neighborhood now called Belltown) for $25 a month and opened their Bon Marché. The early years were a struggle. They often kept the store open from 7 a.m. to 9 p.m. Josephine filled the shelves, did the accounting and cleaned the store, in addition to waiting for customers.

Although the store is a few blocks from the main downtown shopping district, the townspeople have started doing business with the hardworking young couple. Gradually the store grew and began to prosper. In 1896, the Nordhoffs moved to a better location, to an L-shaped one-story building at 2nd Avenue and Pike Street, closer to the business heart of the city.

Edward died in 1899, of a disease his doctor called “phthisis” (probably tuberculosis). Josephine continued to operate the store. She remarried two years later. Her new husband, Frank McDermott, joined her along with Rudolph Nordhoff (Edward’s brother) in the business.

An active citizen and businesswoman, Josephine was a member of the Seattle Day Nursery, the Seattle Orthopedic Hospital Association, and many other charities. As early as 1918, she defended the eight-hour working day, a controversial position at the time. She died of cancer in 1920. On the day of her funeral, all major retailers in downtown Seattle closed their stores in her memory.

Frank McDermott and Rudolf Nordhoff continued the development of the company. Annual sales rose from $338,000 in 1900 to $8 million in 1923. The 2nd Avenue store was expanded several times. In 1928, McDermott and Nordhoff commissioned a new $5 million building at 3rd Avenue and Pine Street, designed by prominent Seattle architect John Graham Sr. Just before the opening of what became the landmark building of the company in downtown Seattle, in 1929 the store was sold to Hahn stores in Chicago. Five years later, Allied Stores bought the Hahn chain. The two corporate owners continued to operate the store under its original name.

Le Bon began opening additional stores after World War II. In 1949 he provided the flagship store for one of the world’s first modern shopping malls, Northgate Mall. In 1986, when Campeau Corporation acquired Allied Stores, Le Bon Marché was one of the best-known retailers in the Northwest, with approximately 40 stores throughout the region.

After another change in corporate ownership in 1992, the Bon ended up in the hands of Federated Department Stores, Inc., a Cincinnati-based company that also owns the Macy’s and Bloomingdale’s chains.

In August 2003, Federated “renamed” Le Bon Marché, transforming it into Bon-Macy’s. Federated also added “Macy’s” to the names of four other regional chains under its umbrella (Burdines in Florida, Lazarus in the Midwest, Goldsmith’s in Tennessee and Rich’s in the Southeast). Customers had about a year to get used to this change when, in September 2004, Federated announced that all of its regional chains would be renamed Macy’s.

In 2004, “Bon-Macy’s” consisted of 50 stores in Washington, Oregon, Idaho, Montana and Wyoming. New store signs, simply reading “Macy’s”, were in place by January 2005.