A look at the specifics 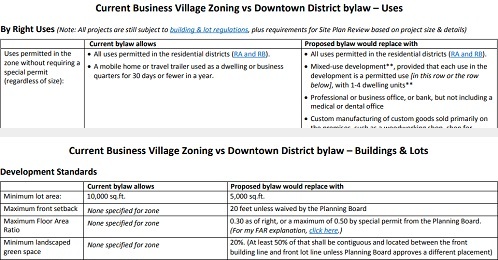 Above: I’m trying to make it easier for readers to understand what would and wouldn’t change under Section 10 of the city’s special meeting mandate.

I see a lot of commentary and chatter on the internet about what the proposed zoning of the downtown district will do. Frankly, I don’t know how many readers actually know about the proposed changes.

(It doesn’t help that due to Covid security, the city can’t hold traditional in-person forums before the city meeting. Also, paper sponsors won’t be able to make presentations at the screen at the special town meeting on Nov. 1.)

So I try to help readers understand in advance what the proposed zoning changes mean. (Or, at least, figure out what questions you want to ask.)

I tried to do for you the most boring part of the job of studying the draft settlement line by line to compare with the current code.*

Click here to see the differences in the uses of the building that would be allowed by a special fee or permit. (At least, in the area defined for the Downtown District on the map to the right. For properties marked as remaining in the Downtown Business Village District, nothing will change.)

But uses aren’t the only part of the zoning code that would change.

To update the zoning (and presumably compensate to allow more rights uses), the draft by-law specifies the details of lot development. There are specific requirements for landscaped green spaces, parking per use, etc. You can take a look at these differences here.

*[Note: The comparisons I make are based on the version of the Article that voters will be asked to approve, based on modifications after the Warrant was posted.

You can find the Warrant here on the Town’s website. (The handout for amending the Article had yet to be posted when I posted this story. But that is the page that Town officials are likely to post handouts to.)]

Update (10/28/21 9:47 AM): Based on a comment from Tim Martel of Advisory about a section I missed on the applicability of site plan approval, I have revised the document describing the construction and terrain requirements. This week, elected officials released their own analysis of the differences between the current settlement and the proposed settlement. you can read this here.