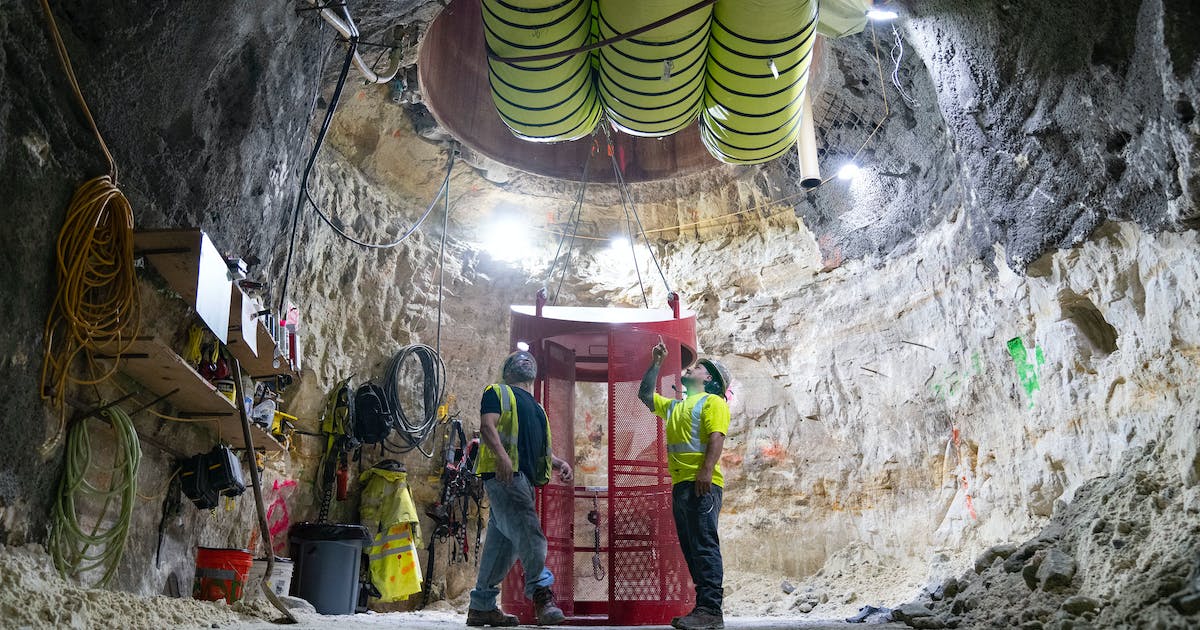 Each morning, Eric Fobbe and his colleagues harness themselves into a red cylindrical cage which is then slowly lowered into a hole in the floor.

As it sinks below downtown Minneapolis, sunlight is swallowed up. The cage shakes as it descends a metal-lined shaft into the earth below the street, past the layer of limestone, and into the sandstone below. Traffic noise dissipates quickly and is replaced by the roar of ventilated air.

Finally, about 80 feet underground, a large cavernous room opens up. Brilliant white lights expose what looks like the rotunda of a tall building in light-colored sand. At the end of a short path, massive tunnels open to the left and right, large enough to accommodate a school bus. A team of workers create a new underground world.

“I’ve worked in tunnels a lot throughout my career here,” Minneapolis sewer operations engineer Kevin Danen said after a recent tour of the new $57 million Central Tunnel project. “But that one took my breath away. It was an awesome sight.”

Unseen to most of the city above, crews are constructing a large stormwater tunnel under downtown that parallels an existing tunnel under Washington Avenue. Work began in September and will end in June 2023.

Why are they building this?

The project is designed to alleviate flooding issues in downtown Minneapolis.

When the current stormwater drainage system was built in the 1930s, the downtown area still had houses, dirt streets, and grassy courtyards to soak up the rain. Now, concrete dominates the landscape and some skyscrapers take up entire city blocks. The extra water has nowhere to go except into the aging system.

“The tunnel system is under pressure right now, because we’re trying to put too much water in there. … It’s actually cracking the concrete,” Danen said. Repairs would cost up to $600,000 per year.


Deep beneath the streets of downtown Minneapolis, a network of tunnels built in the 1930s to channel stormwater to the river is packed when it rains. A $57 million project near Washington Avenue will ease the pressure.

1. Rain tunnels divert water to the river, while sanitary tunnels send the water to be purified in Saint-Paul.

2. Age and increasing torrents of pressurized water have taken their toll on existing stormwater tunnels. The city is repairing the existing tunnel and building a much larger one next to it.

3. The 4,200 feet of new storm sewer tunnels will be twice the size of the old system and will be able to handle runoff from a 100-year storm.

Beneath the streets of Minneapolis, there are 830 miles of sanitary sewers that carry sewage from homes to a treatment plant. There is also a system of over 500 miles of storm pipes and 12 miles of deep tunnels to channel rainwater from street entrances to nearby lakes or rivers. There are almost four miles of tunnels under the city center.

The current central city tunnel is 6 feet in diameter. When the new tunnel, which is about twice that size, is finished, the two tunnels will work together.

“It’s just kind of a good example of us reinvesting in our infrastructure and trying to be proactive in the changing weather conditions that we’re experiencing,” Danen said.

What is an average day?

Fobbe, 46, of Buffalo, has worked in the tunnels for 12 years. When he goes to his job under Minneapolis, he wears a helmet, face mask and goggles. He uses a lunchbox-sized remote control to control a bright yellow-orange demolition robot called the Brokk. He uses grinders at the end of a long arm to knock chunks of sandstone off the walls.

Green lasers draw the outline, so Fobbe knows what and where to grind.

His “style” is to carve out a cathedral shape to allow the sandstone to cup on itself at an arched point for extra support. Not all inground systems will be the same shape. Another portion of tunnel enters denser limestone, which may support a box shape.

Other workers use bulldozers – the size of a large lawn mower – or an excavator to remove sandstone from the ground. It has the texture of chalk or baby powder. He is eventually picked up in a tub which is lifted by a crane out of the tunnels and thrown into the street. Workers then load it into a dump truck, taking it to a landfill or elsewhere for reuse.

The newly cleaned tunnel walls are sprayed with sodium silicate to harden the sandstone overnight. Next, crews put in place rebar, mesh and anchor bolts to hold the sandstone in place. Work continues from 7 a.m. to 6 p.m. most days.

Soft light brown sandstone is what makes this project unique for Bruce Wagener, CNA tunnel engineering consultant, who has worked on over 300 tunnels.

“It’s easier to dig in, but it takes a little more support just to keep it from collapsing,” he said.

It’s not a bad place to work, with temperatures kept at around 50 degrees, which feels like a house basement. Yellow tubes run along the ceiling and up the shaft to provide ventilation.

Fresh air is renewed every three minutes. Face masks are, however, worn to protect against inhaling toxic silica dust from grinding sandstone.

Construction is halfway through. The total Central City project covers approximately 4,200 feet. The new tunnel and the current tunnel will connect to the junction structures. Two of the four structures have been built.

Once digging is complete, workers will line the tunnels with concrete. Both tunnels will carry stormwater to the Mississippi River, entering near the Stone Arch Bridge.

Weather conditions can cause a few roadblocks. In the event of heavy rain, workers will evacuate and wait for the existing tunnel to drain the water. Snowstorms could affect worker access to the site or delay excavation.

“Any underground construction involves a lot more unknowns than surface construction because when you’re working above ground you can obviously see everything you’re dealing with,” Danen said. “When you’re underground, things can change.”

Eventually, large machinery and other underground supplies will be lifted up a shaft, the same way they – and the workers – entered.