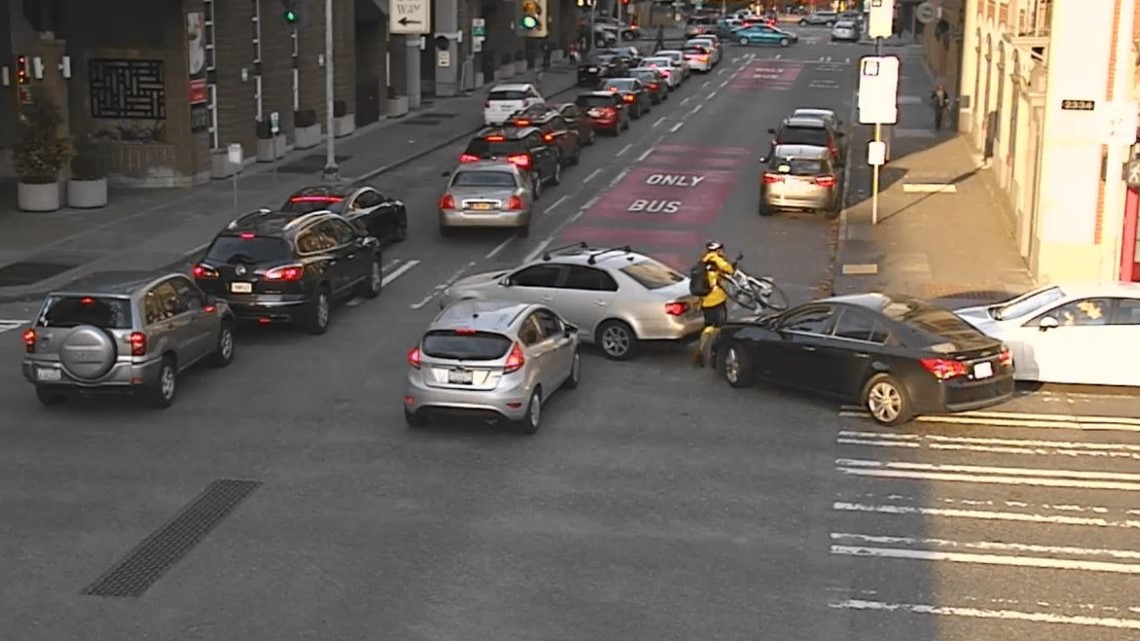 Drivers caught blocking crosswalks or driving in transit-only lanes will receive their tickets in the mail.

SEATTLE — Seattle drivers beware! A new program, which has taken months to prepare, will begin automatically issuing tickets for vehicles that block crosswalks or use transit-only lanes at select downtown intersections next month.

The “Don’t Block the Box” program, originally announced by the Seattle Department of Transportation (SDOT) in November 2021, consists of cameras at eight different intersections across the city that will photograph the license plates of vehicles violating the law.

The cameras will be activated gradually over a few weeks so that SDOT can test the system and give drivers time to adapt.

The goal is to improve public safety, help maintain public transit, and increase mobility for pedestrians with disabilities.

It is particularly important to keep pedestrian crossings clear, as this reduces the risk of accidents and allows pedestrians with disabilities to cross the street safely. This is particularly evident for pedestrians in wheelchairs or blind people, as vehicles in the crosswalk could block these people in the middle of the roadway.

The cameras will also help reduce the number of in-person traffic stops that police officers have to carry out.

The eight places where the cameras are activated are:

Cameras at each location will enforce either the Transit Lane Act or the Crosswalk Act, with the 5th Avenue and Olive Way locations enforcing both.

These locations were chosen based on past issues and ongoing violations, according to SDOT. Each intersection has been fitted with signs and pavement markings to ensure drivers can easily discern where they should stop at traffic lights and which lanes are reserved for buses.

Half of the program funds will go to safety projects for cyclists and pedestrians. The other half will be used to improve the safety and mobility of residents with disabilities. Specifically, SDOT plans to use the money to invest in more accessible traffic signs, which can vibrate and make noise to let people who are hearing or visually impaired know that it is safe to cross.