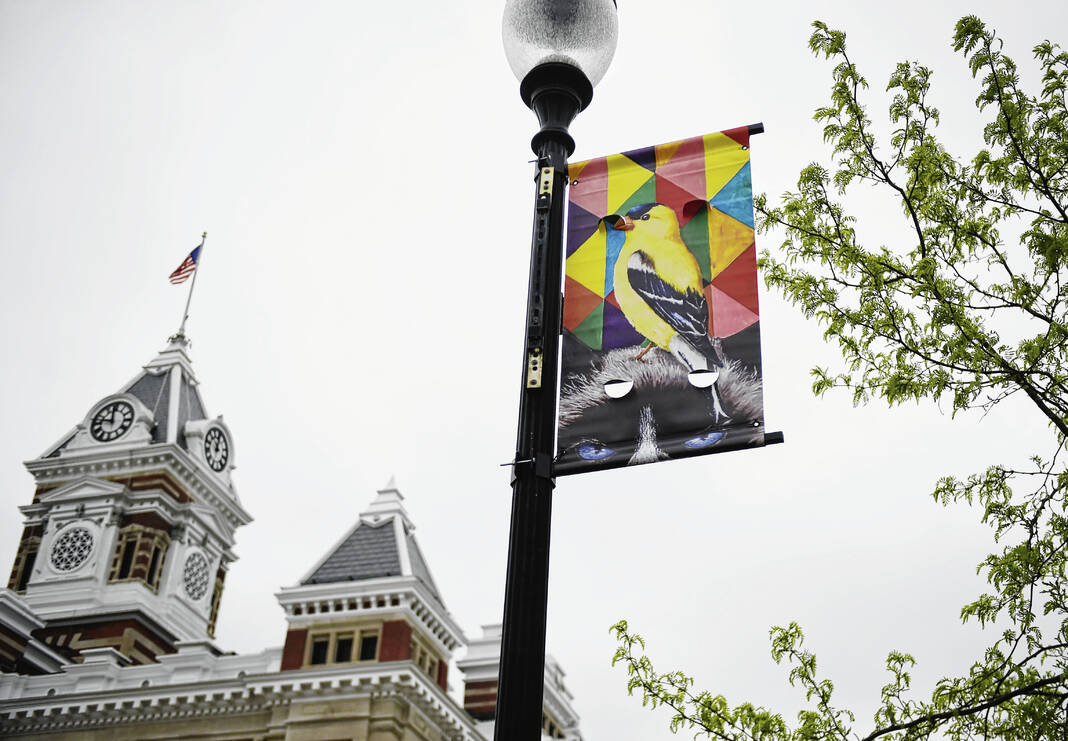 Around Franklin’s Courthouse Square, visitors come face-to-face with a hedgehog sailing in a teapot, a grizzled old sailor sea turtle, and a beagle portrayed as a flying ace.

On the next block, they will discover the colorful beauty of Johnson County’s native plants and flowers. Vivid abstract flowers add pizzazz to downtown.

Murals, installations and other avant-garde projects have come to define the space of downtown Franklin. The most recent additions only reinforce the city’s reputation as a stronghold for the arts.

In an effort to beautify downtown Franklin and support the local arts community, a series of artist-designed banners were installed on lampposts around the courthouse plaza.

“It was a way of really introducing the community to our local artists and helping people realize that we have some very creative people here in the city,” said Dana Monson, community development specialist for the city. of Franklin. “It’s nice to see this natural creativity emerging in your local community.”

The opportunity to see their art showcased so prominently has been exciting for those chosen for the project.

“To be part of it, to welcome people, it’s an honor to have my designs,” Brenton said. “Having a banner for the city I love and showing it’s my job is exciting.

The banner initiative is part of Franklin leaders’ hopes of emphasizing art and culture in the downtown core, Monson said. To achieve this goal, the Franklin Public Arts Advisory Commission was established in December 2020 to propose art projects and advise the mayor’s office on public art matters.

Officials are working to have the city designated as a cultural district in the state of Indiana. Cultural districts are designated by the Indiana Arts Commission as well-recognized, labeled, mixed-use areas of a community in which high concentrations of cultural property serve as anchors.

Existing neighborhoods are in Bloomington, Carmel, Fishers and Noblesville.

“(The banners) are the first project that the public arts commission has decided to launch. It was affordable and easy to do, and it would be a great way to showcase our local artists,” Monson said.

Last summer, the organizers published a call for entries, obtaining a response from around 15 artists. The shortlisted works were chosen by the Public Arts Commission and the winners were announced in June 2021.

Brenton’s design is displayed on 30 banners along King Street, welcoming visitors as they enter the town. His blue and yellow banners rotate different images that he says portrayed Franklin on the banners: a photo of Benjamin Franklin, the Johnson County Courthouse, the ArtCraft Theater marquee, and the looped waterslide at the Franklin Family Aquatic Center .

“The idea was to show some Franklin icons,” he said.

As a longtime Franklin resident, Brenton wanted to enter the banner contest when he heard about it. He owns Brenton Creative, a local marketing agency, and felt proud to help bring attention to his hometown.

“I love Franklin, I love living here. I’ve lived my entire life in Johnson County, so it was exciting to design something that welcomes people to our city,” he said.

Potter, who is known for his cheerful depictions of animals in unusual situations, has been active in the local art scene for years. He has designed murals for downtown in the past and when he heard about the banner opportunity he decided to put more of his art there.

“I have a few murals in the city, and then I thought if I put up with that and they put more up, I’d have jobs all over the place,” he said. “That’s my goal, getting a lot of my work around town. I thought that would be pretty funny.

“Paintings make people laugh, so I thought it would work,” he said. “When we submitted it, something must have stood out to make them choose them, so that feels good.”

Johnson’s unique abstract flowers burst with color along North Main Street. Johnson, who is active in the Johnson County art scene, has seven banners hanging around the Willard and Historic Artcraft Theater.

Her husband told her about the banner project and decided that her work would appeal to the commission.

“I thought it would be a good fit for the art work I do,” she said.

The vibrant colors of her paintings match perfectly with the downtown atmosphere, she said.

“I spent a lot of time in Franklin, and there’s a cool vibe downtown. I thought my pieces would match that energy,” she said.

“People relate to plant life. It’s familiar stuff, it’s Indiana stuff, and I associate banners with spring. It’s about renewal, and I thought it fit the place,” she said.

She heard about the Generation Art and Frame banner project, where she often has her work and that of her students framed.

“I thought it would be a good thing to participate. For one thing, it’s very public. I teach high school and I want my students to know that I work. I don’t just make them work,” she said.