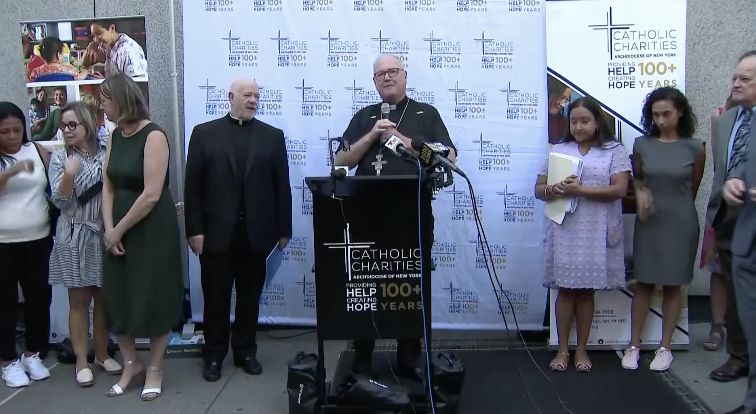 MANHATTAN — It took Jennifer four months to travel from her home in Venezuela to New York to escape economic and social turmoil in the troubled country. The last leg was a bus trip from the southern border with Mexico.

But the hardest part, said the young woman, was the rugged trek through Panama, where some of the children of other migrants disappeared forever into dense jungle; others died of disease.

Jennifer is among 1,500 migrants, most from Venezuela and Colombia, who are receiving help from Catholic charities here after arriving by bus from the Mexico-Texas border.

She was asked to make a statement at a press conference on Tuesday, August 16 outside the New York Catholic Center on First Avenue. The main speakers were Cardinal Timothy Dolan, Archbishop of New York, and Msgr. Kevin Sullivan, executive director of Catholic Charities of New York.

More than 6,000 migrants have been bussed to the city so far, and Catholic Charities of New York has helped around 1,500.

The agency’s Immigration and Refugee Services office in midtown Manhattan provided many of them with information about their legal rights and responsibilities as migrants. The staff also served them lunches and distributed essential items, such as toiletries.

But it hasn’t been easy. Texas Governor Greg Abbott, a Republican, accused Democrats of not caring about how mass migration weighs on border states. He then transported migrants by bus to “sanctuary cities” like New York.

Maryann Therappel, the agency’s lead immigration counsel, said migrants without parents to the United States should list the offices of Catholic charities as their home addresses.

“These are not residential addresses. These are not spaces capable of accommodating these immigrants,” she said. “And worse, the government assumes that these are addresses that [the migrants] can receive mail at.”

Catholic charity addresses have been used for more than 300 migrants so far, according to Therappel.

“This is not their address. These are customers we have never met. The notices are dated for people who entered the country in the last few weeks,” she added while noting that many of them didn’t even make it to New York.

The local agency was inundated with migrants – and their needs – before staff members could adequately prepare to handle them all. Therefore, helping them has been a struggle, Therappel said. She added that Catholic Charities is working with national partners “to hold the federal government accountable.”

“I think there’s a need for more coordination at the federal level,” Therappel said. “The federal government has a duty to ensure that all of its agents, including those on the southern border, operate with dignity and humanity for all who arrive on American soil.”

Jennifer said she knew nothing about how the transport of migrants north became a political dispute between Greg Abbott and New York City Mayor Eric Adams.

She was just happy to have reached a destination. Jennifer has no family in New York, but she met and bonded with other Venezuelan women during her trip.

The translation for her was Mariana Duenas, a senior social worker for Catholic Charities.

“She saw parents saying goodbye to their children because they were dying in front of them,” Duenas said. “There were people who continued the journey, some with missing legs, with crutches.

“Certainly, she was looking for a better open window for her family.”

During the press conference, Jennifer said she was grateful to be housed in a clean and safe shelter provided by New York City. Now, she says, she is ready to find a job and contribute to her new community.

Cardinal Dolan said while others debate political issues in this latest migrant crisis, the Church has a role to serve those in need.

“I had a statement to say, but something changed about 45 minutes ago when I visited some of our newly arrived families,” Cardinal Dolan said. “It’s not just about refugees and asylum seekers in the plural. They are people with names and with dads and moms. They are husbands, wives and children.

“And we love them, and we welcome them. They have just come through the turmoil.

Msgr. Sullivan said the agency will partner with the city and other agencies to provide a “welcome center” to expand services for migrants. Its opening is scheduled for August 25.

According to Cardinal Dolan, the Catholic schools of the Archdiocese are preparing to offer scholarships so that the children of these families can go to school, just as has been done for the children of Haitian, Afghan and Ukrainian refugees.

Cardinal Dolan said he saw similar challenges last spring during a meeting with relief agencies in Poland helping those displaced by the war between Russia and Ukraine.

“They then told us that at the moment we are doing well to welcome them, feed them, care for them, clothe them and settle them,” he said. “But if this continues, we are going to have a capacity problem.”

After the briefing, Cardinal Dolan was confident that his counterparts in the Diocese of Brooklyn would play an important role in helping the new migrants, adding that Msgr. Sullivan is in daily contact with them.