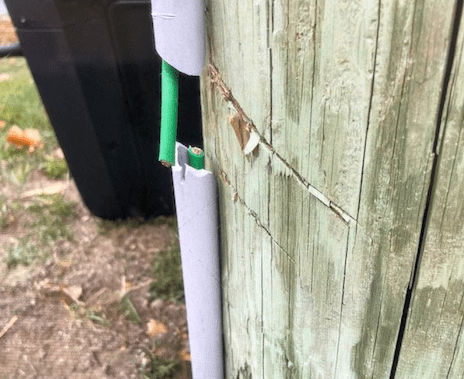 Between late Wednesday evening and early Thursday morning, the Cobourg Police Department said wires recently installed to power a CCTV camera on University Avenue East near Walton Street were cut. The camera itself had not yet been installed.

Police believe a reciprocating saw was used in what they call an act of mischief.

Police Chief Paul VandeGraaf held a brief press conference on Thursday, saying he was ‘disheartened’ by the damage while stressing the importance of the CCTV system, which will feature 25 cameras as part of a mesh network surveillance system in downtown.

“When we deployed our CCTV network, our crime analysts took a lot of time and detail to research the most beneficial locations in our community – especially downtown – to improve the safety of all citizens of the town of Cobourg,” he said. “This location was identified as an advantage.

“Obviously the information our analyst has is correct, because someone doesn’t want us to be in this neighborhood,” he added.

He says the act of mischief will not deter the service from installing its cameras.

Wiring repairs were completed Thursday and the camera was installed Thursday afternoon, he said.

The cameras are part of $200,000 provided by the Province of Ontario two years ago through Ontario’s Closed Circuit Television (CCTV) grant program.

“The CCTV cameras allow the police to have quick responses after the event for victims of crime and to ensure that we are doing everything we can to keep the community safe,” he said. he declares.

Anyone with information about the incident is asked to call Cobourg Police at 905-372-6821 or leave an anonymous tip with Crime Stoppers by calling 1-800-222-TIPS or visiting stopcrimehere.ca . Tips received through Crime Stoppers may qualify for a cash reward.