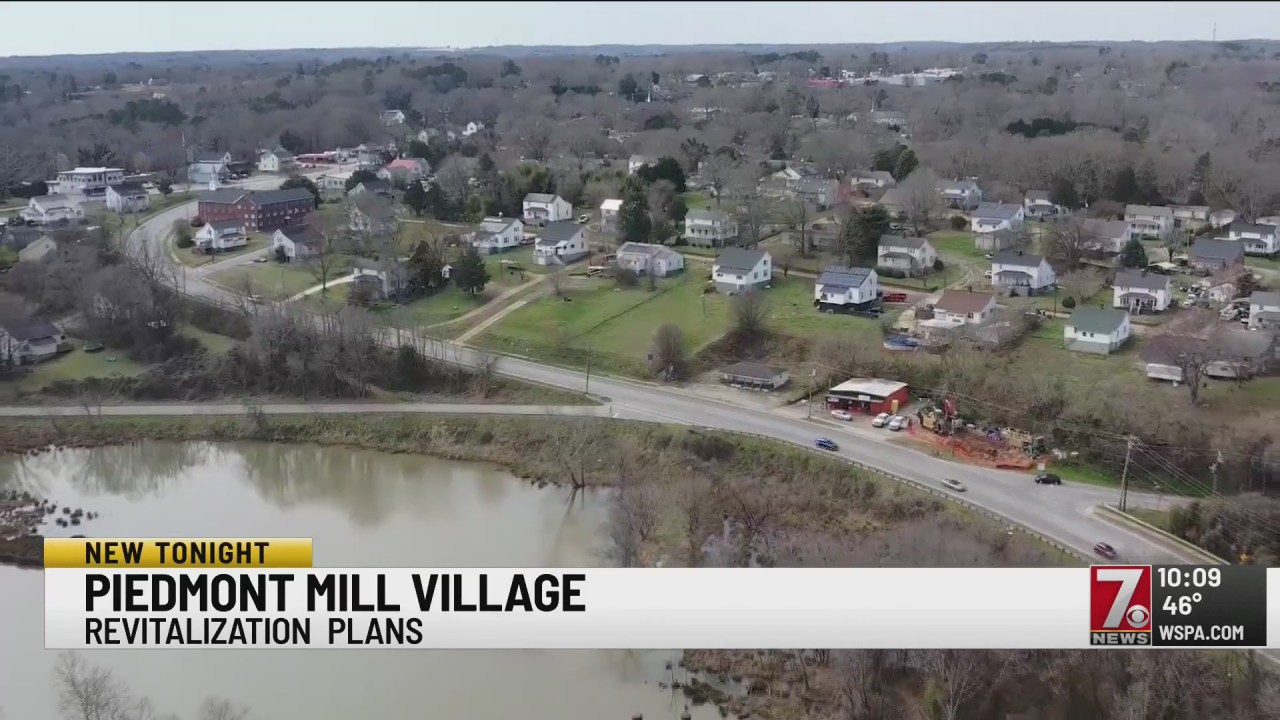 PIEDMONT, SC (WSPA) – The revitalization of downtown Piedmont is back on track. The developers had to pump breaks on the project when the pandemic hit.

The Mill Village in Piedmont was once a bustling place, straddling Greenville and Anderson counties.

“There were two mills right here in Piedmont. One was on Anderson’s side. One was on the Greenville side and there was a walkway between the two,” said Councilman Lynn Ballard, Greenville County, District 26.

“My late wife was born in Pelzer and grew up in Piedmont, and when I was first elected, she started that day: ‘When are you going to bring downtown Piedmont back to life because it was once a vital and vibrant place?” Ballard said.

“This whole community was a nice place to live. People took care of their homes, kept their grass clipped. Good neighbors. It’s sad to see it deteriorating,” said Davy Darnell.

Darnell owns property nearby and worked at one of the factories.

In 2019, counties and developers started talking about how they could bring dead space back to life, until COVID-19 shut everything down.

“COVID. I mean plain and simple,” Ballard said. “Bankers were reluctant to get into anything new. When we didn’t know what was going to happen to the economy,” he said .

Two projects in one, are finally on the rise again.

“My group, Piedmont Village Partners, I’m the managing partner and I purchased the 12.6 acres on the river below the community center,” said Brad Skelton, owner of Red Oak Developers. “

“Our original plan was to always put some sort of residency there with probably a commercial component to it originally, and then of course COVID hit and shut us all down a bit,” Skelton said. “We’re going to build somewhere between 95 and 105 townhouses,” Skelton said. “Townhouses will likely be two or three bedrooms from the 2 and 3 up.”

“We have a lot of plans to not only do that, but with West Cox, who is our state rep, we’re going to put the pedestrian bridge over the river, so I’m spearheading it with him,” Skelton mentioned. “We will set up and take out the kayaks under the dam for the kayakers. Yes it is a private development but we will have public access on the shore for people to come in and use,” he said.

Skelton said his side would be a $22-24 million project when complete.

“It will be a beautiful residential area with a park and riverside promenade,” Ballard said. “Kayakers can get off and walk around the dam and get back in the water, then continue down the river to Pelzer. They hope to attract people,” Ballard said.

Development is also underway for the old Mercantile building.

Despite the setback, executives are hopeful that the construction that is expected to begin soon will be just the beginning.

“I would really say that we are bringing the building back to life which in turn will bring the little village back to life,” Webb said. “We’re bringing business back to Piedmont, that’s what gets people excited.

“We believe this will drive growth. More housing to be developed around here. More companies coming here,” Ballard said.

Darnell hopes everything will happen soon.

“Interior demolition will begin in March. We had planned to begin building renovations in March 2020 with an opening in late 2020,” Webb said. “Unfortunately, we don’t know how long this will take, due to supply chain issues at the moment. The cost has increased significantly since August when we started repricing. So the cost has increased. We are at $6 million for this building,” Webb said.

Skelton said developments around the river are expected to start this summer.