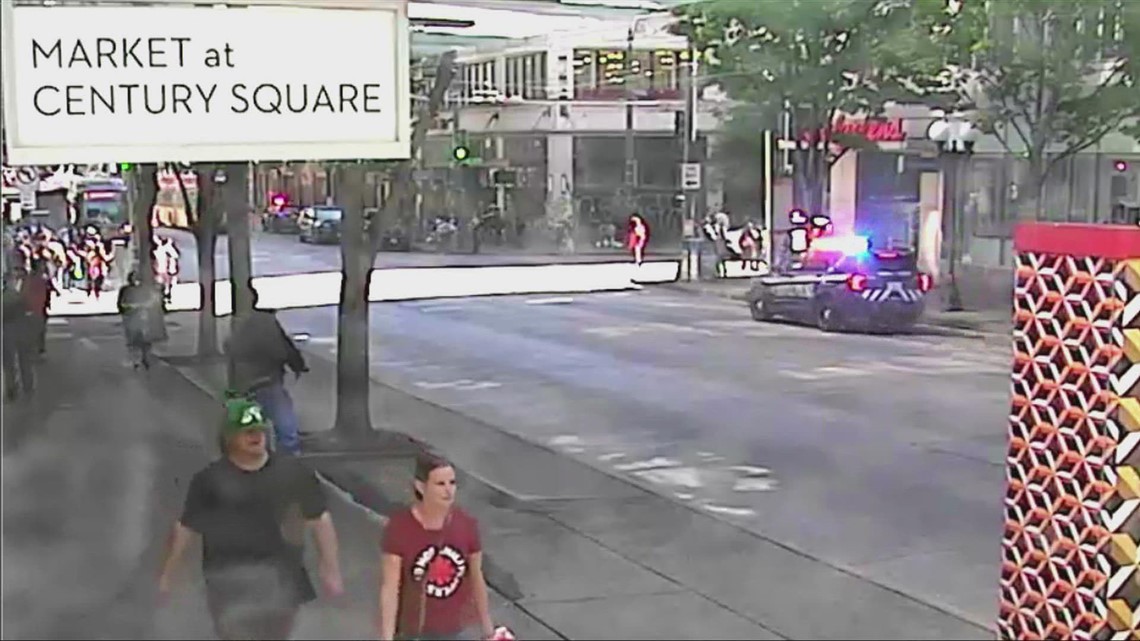 The suspect in this case is in custody and charged with murder.

SEATTLE — New surveillance video shows a violent random attack in downtown Seattle on August 2 that ended in the death of a 66-year-old man.

In the video, Aaron Fulk, 48, and the 66-year-old can initially be seen talking to each other. Fulk then appears to pull out a metal bar and swing it at the man.

Fulk is seen in the video being arrested shortly after.

According to charging documents, a Seattle Police Department (SPD) officer was in a patrol vehicle traveling east on Pike Street around 3 p.m. on August 2 when she heard the 66-year-old shout “help me, help me”.

The officer saw Fulk raise a 3ft 4in metal pull-up bar above his head in a downward fashion to hit the victim, court documents show. The officer said the victim fell “immobile” to the ground when he was struck in the side of the head.

The attack occurred on a busy street “in view of a Seattle Police Department officer and several witnesses,” the court documents detail.

Police say the victim was unarmed and needed a walker to get around. The 66-year-old was 5-foot-6 and weighed about 120 pounds, according to King County prosecutors.

Emergency crews arrived and treated the victim, who regained a pulse minutes after the attack but remained unconscious. Court documents say the victim was at Harborview Medical Center in “serious” condition, but a SPD blotter station states that he died of his injuries on August 6.

Officers at the scene said Fulk showed no remorse for the attack, telling medics, “he’s paralyzed now, isn’t he?” Fulk would have said. “If I have to go to jail for this. I will,” and signaled his intention to kill him when he said, “I’m going to kill him a million times over.”

Fulk told officers he beat the old man because he was “doing the devil’s job”.

Fulk is charged with first degree murder and is being held in King County Jail on $2.5 million bond. His next court appearance is scheduled for September 8.

LOOK: Playlist of the best KING 5 stories on YouTube