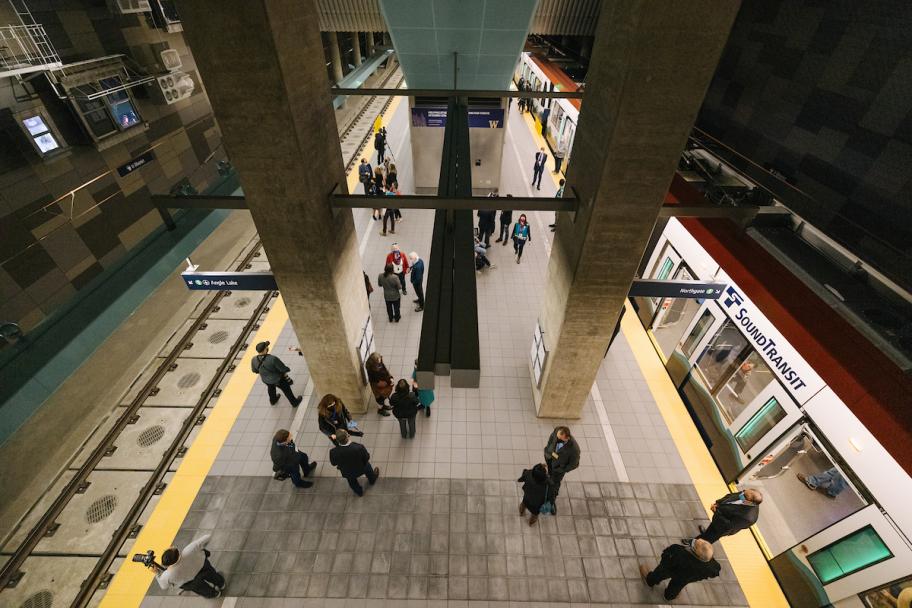 Looking down at the underground U District station platform from the mezzanine.

A key element of the West Seattle and Ballard Link Extensions Project is a new tunnel under downtown Seattle.

This tunnel will include six stations as part of the Ballard extension, but it will serve the entire light rail system, increasing capacity and providing transfer points to allow passengers to move between lines.

As people started studying the recently released post Draft Environmental Impact Statement (DEIS)some wondered about the depths of the stations and what the user experience would be like to access the platforms and transfer between lines.

There are several factors in the Downtown segment that influence the depths of the tunnel stations.

In addition to physical considerations such as existing terrain, soil properties, and existing underground infrastructure or building foundations, geometric design constraints imposed by the depths of adjacent stations can also determine the underground depth to which a station must be built.

The table also summarizes the types of vertical circulation (ie, would the station only have elevator access, or would there also be escalators and stairs).

The planned station depths for the proposed stations are shown in the graphs below along with comparisons to some existing Sound Transit stations.

In most cases, to access the stations, passengers traveled from the surface to a mezzanine, then descended from the mezzanine to the platform.

Direct access to the platform from the surface is impractical for stations located within the street right-of-way (unless a street is closed to traffic or otherwise significantly reconfigured).

We look at things like redundancy in vertical circulation, type and amount of escalators and stairs, and using intuitive design and layout to reduce reliance on signage.

Details of each of the new downtown tunnel alternatives are in the Draft EISincluding impacts on natural and built environments, and existing transportation systems.

The draft EIS also outlines how people will be able to get to stations and access the larger system when it is complete. Each alternative has its own impacts, costs and characteristics.

We encourage you to visit our online open day to review the information, then let us know what you think.

The comment period for the draft EIS runs until April 28th. This is your chance to let the Sound Transit Board know what you like and what concerns you about the alternatives on offer.

These comments will help the Board determine whether to confirm or modify the preferred alternative later this year.

You can find more information on our online open house.

And, for more information on platform depths, please see the Sound Transit website.