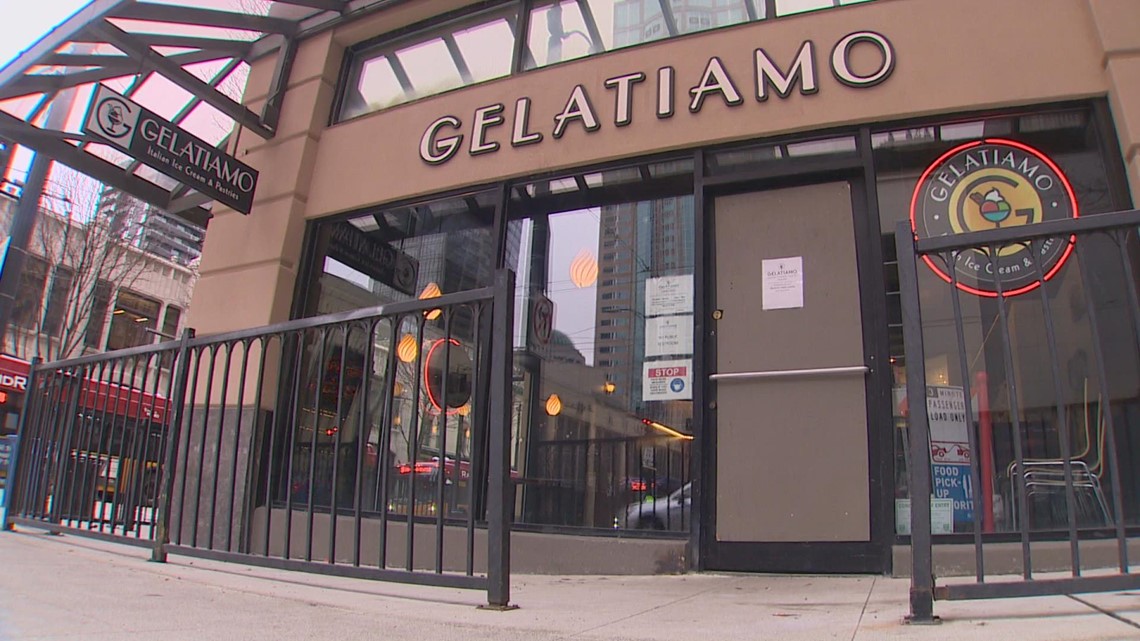 The Downtown Seattle Association says $564,000 was spent in the 2020/21 fiscal year, with most of that money from businesses going to private security firms.

SEATTLE — Frustrated Seattle store owners say the cost of doing business downtown continues to rise, and they point to security concerns as one of the main reasons.

The Downtown Seattle Association says $564,000 was spent in the 2020/21 fiscal year, with most of that money from businesses going to private security firms.

The Downtown Seattle Association provided this statement to KING 5:

“We have contracted with the SPD to provide overtime officers for years, but downsizing has prevented the SPD from filling the number of shifts we requested. And we know that sections of the city center need more attention.

We have a contract with a private security company so that we can complete the shifts that SPD can still provide. Additional security provides support for our ambassador teams to work safely, and provides an extra pair of eyes that can quickly respond and coordinate with the SPD, should public safety needs arise. »

At the corner of 3rd Avenue and Union in downtown Seattle, Maria Coassin owns Gelatiamo, a business she has operated there for 25 years. Coassin says the past two years have been the worst she has seen when it comes to crime and vandalism.

On Wednesday, she showed surveillance video of three incidents she said had occurred since mid-December. Two windows were smashed and a fire broke out outside the store.

“Someone came in and broke down the front door,” she said.

On 3rd Avenue, there are condemned buildings on both sides of the street, and Coassin says there has also been criminal activity.

“Drug dealing, robberies, we had two shootings in two days, two weeks ago, right outside the store,” she said.

A Seattle police spokesperson told KING 5 that they provide additional patrols when possible, but the department is facing staffing shortages. Currently, the SPD has 948 deployable officers throughout the department. At one point, the department was to have about 1,350 officers.

At Melbourne Tower, located near 3rd Avenue and Pike, they have private security seven days a week, and it costs just under $1,000 a day, according to general manager Lou Bond.

“It’s crazy that we had to do this,” Bond said. “What we’ve been up against specifically here has been really tough.”

“Spending extra money just to be able to operate safely? Are you kidding. It just doesn’t make sense,” Coassin said.

The Mayor’s Office provided this statement to KING 5, stating that Mayor Bruce Harrell is working on staffing the Seattle Police Department:

“Mayor Harrell finds it unacceptable that small businesses and local businesses feel the burden of carrying out critical public safety responsibilities. He also finds it unacceptable that the police force has reached this level. significantly reduced personnel. He is committed to restoring personnel to nationally best practice levels and is working with the Seattle Police Department on strategies to address the impacts of this personnel shortage and to make progress on this shortage staff – now and in the long term.

“Furthermore, Mayor Harrell knows the challenges facing downtown are real and significant – for neighborhood residents and local businesses. He meets regularly with neighbors, businesses, stakeholders and advocates for public safety to advance change, reset standards, and make measurable progress toward a thriving downtown.On immediate crime and safety issues, he also meets with the Chief of Police and the Police Department on an action plan during the first quarter of the year.

“Behind every small business there’s a heart and there’s a story, and sometimes we just don’t look at that. We just look oh, it’s another down business,” Coassin said.

Coassin’s family have been in the baking business for 200 years and they say they are determined to keep their small downtown store going.