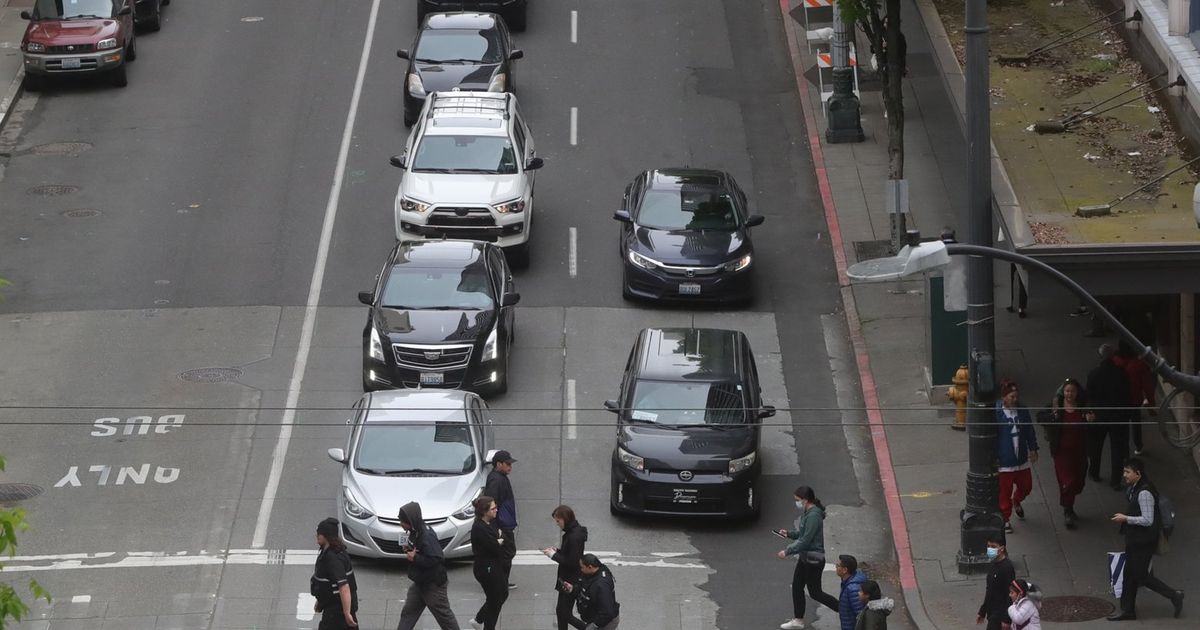 Travel to downtown Seattle is slowly picking up speed as hybrid work arrangements and cautious office reopenings delay any mad dash to the pre-work routine, according to a new report from traffic analytics firm INRIX. -pandemic.

The stagnation, even as nearly all coronavirus restrictions have been rolled back, raises the question of when or if workers will fill the Seattle core again. Bob Pishue, transportation analyst at INRIX, said their data showed no urgency to return and it would be up to the city to think about how to get more people downtown for reasons other than work. .

“As downtown businesses or chambers of commerce or government officials talk about how to get people back downtown, I think what we’ve determined from this report is that ‘they have to look beyond the office,’ he said.

Seattle is seeing 70% of travel to downtown as it did before the pandemic. This is a marked increase over the previous year, when it was only 41% of trips. But it’s worth noting that many of the increases were confirmed last August, Pishue said. Since then, the city has only seen a single-digit increase in travel.

“It’s starting to feel like the new normal and I think we should start preparing for it,” Pishue said.

This does not mean that the roads are empty. Data from the Washington State Department of Transportation shows traffic volumes in the state are only 5% lower than they were before the pandemic. And Pishue said INRIX is noting similar volume in the Seattle metro area.

But the nature of those trips has changed, suggesting that people are making more local or recreational trips and not necessarily going to the office.

According to INRIX’s analysis, most cities are still below pre-pandemic commuting levels. Seattle shares company with Dallas and Washington, CC, at its 70% level.

Two cities met or exceeded 2019 commute counts: Denver and Nashville. Nashville stands out, at 125% of pre-pandemic levels. Looking at city data, Pishue said you see big spikes on Friday and Saturday nights, a sign that downtown Music City — or NashVegas for some — is itself an attraction. The number of people driving into downtown Seattle on Friday or Saturday night is dropping.

“Now the weather is different in Nashville, Seattle and New York,” Pishue said. “There are other factors here, but we’re just saying, hey, based on the transport data, we might be able to see what’s working, what’s not, sort of in real time.”

Downtown Seattle could be particularly vulnerable to a drop in commuter numbers, with more than 11% of the metro area’s jobs concentrated there. Much of this is due to Amazon not requiring its employees to return to the office.

This number aligns with the Downtown Seattle Association’s estimate that 33% of downtown workers commute to the office three or more days a week. Like the INRIX commuting data, the number of office workers has remained virtually flat since February.

Jon Scholes, president and CEO of the Downtown Seattle Association, said he was “optimistic” about the return of office workers, especially as the summer weather arrives and people find more reasons to leave their home. Surveys of downtown businesses show more may soon encourage workers to show up in person, he said.

“Summer is a great place to be downtown,” he said. “It’s a period when there are plenty of things to do, especially after work.

Scholes said he doesn’t expect a full return to 2019 in-person work levels, but said he still believes Downtown could see 70% capacity by fall .

Transit ridership is still well below pre-pandemic levels, but has seen a more robust rise in 2022. Sound Transit’s total ridership rose to 2.5 million riders in March, from about 2 million in February and 1.8 million in January. Light rail is responsible for most of the increase.