Governor Andy Beshear declared a state of emergency on Saturday due to a powerful violent weather system generating heavy rain, thunderstorms, tornadoes, hail and strong straight winds affecting much of the west, of eastern and south-central Kentucky.

Heavy rains carrying totals of 2 to 5 inches were expected throughout the day over much of Kentucky, followed by a cold front this evening, which could complicate response efforts. Casey County reported a total rainfall of 5.25 inches.

Flash floods in Green, Barren, Taylor, Adair, Owsley, Breathitt and Casey counties have resulted in numerous road closures and water rescues. High water blocked all or part of several roads in Floyd, Knott and Pike counties starting at noon. The counties of Casey and Owsley have declared a local state of emergency.

“It is devastating that we are again facing extreme weather conditions just weeks after the deadly tornadoes hit western Kentucky. Unfortunately, some counties were affected by these two events, ”Governor Beshear said. “We will continue to monitor the weather and provide necessary updates. Everyone should be aware, stay safe, and seek shelter when advised. “

Kentucky Emergency Management has activated the State Emergency Operations Center, and personnel from the Kentucky National Guard, Kentucky Transportation Cabinet, Kentucky State Police, and the Department of Kentucky Public Health is monitoring the situation from the SEOC. 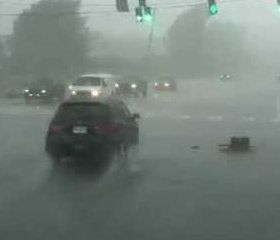 “Sadly, we continue to experience extreme weather conditions across the Commonwealth as we move into the New Year, with impacts in our south-central counties experiencing heavy rains, flash floods, tornadoes and continuous squall lines. “said Michael Dossett, director of Kentucky Emergency. Management. “Please give way to emergency responders operating in many counties and avoid transportation routes today if possible. “

Measures to ensure your safety after a flood:

• Mind the step. Floodwaters often hide sharp and dangerous debris, such as broken glass and metal.

• Wear appropriate clothing protective clothing and equipment such as boots, gloves and safety glasses when it comes to moving debris.

• Stay away electrical equipment after a thunderstorm, or if it gets wet, to avoid being electrocuted. Report any utility issues to your local utility company.

• Flooded houses are dangers. Have a professional check for loose wires, mold, and hidden damage before re-entering.

• Avoid walking in flood waters. It can be contaminated with oil, gasoline or sewage.

• Use generators or other gasoline powered machines only outdoors and away from windows.