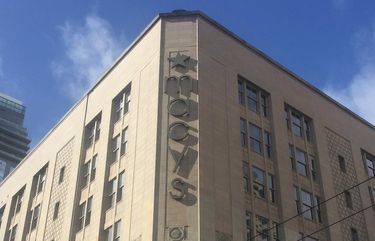 An investment group and a real estate company will together pay nearly $600 million for Macy’s building in downtown Seattle, now dominated by six floors of Amazon offices.

Investment firm KKR and Seattle-based commercial real estate firm Urban Renaissance Group announced the deal Thursday. A source familiar with the deal said the building, located at Third Avenue and Pine Street, sold for around $580 million; records of the sale were not immediately available from the county.

The sale of the historic building comes as the city center has been hit hard by the pandemic and an extensive shift to remote working. Before COVID-19, the downtown area accounted for more than half of the city’s jobs and tax revenue. Online retailers like Amazon have also decimated physical retail businesses.

Amazon said it would continue to lease those six floors, enough space for about 2,000 employees. Although some tech companies are turning to remote working, the tech giant said this week that it expects employees to return to its offices by fall.

KKR and Urban Renaissance Group said the lower floors of the Macy’s building would be “designed to accommodate flagship stores”, but did not reveal any tenants.

The agreement “reflects our mutual trust in the region and in particular in downtown Seattle, where we look forward to strengthening Seattle’s commercial core,” said Urban Renaissance Group CEO Patrick Callahan. in a press release.

The downtown landmark housed the Bon Marché flagship store for decades, then Bon-Macy’s and Macy’s.

The building will now feature “a timeless facade, a 20,000 square foot roof terrace, unique interiors and 15 foot high ceilings with ornate colonnades and dramatic architectural features that hail from the department stores of the era of 1920s,” according to KKR and Urban Renaissance Group.

The newest commercial iteration of the building – named The Bon Marché Collective – will include space for rent from 3,000 square feet to 16,600 square feet and potentially a food hall.

The Victrola Cafe, which occupies a space at the corner of Third Avenue and Pine Street, should remain in this space.