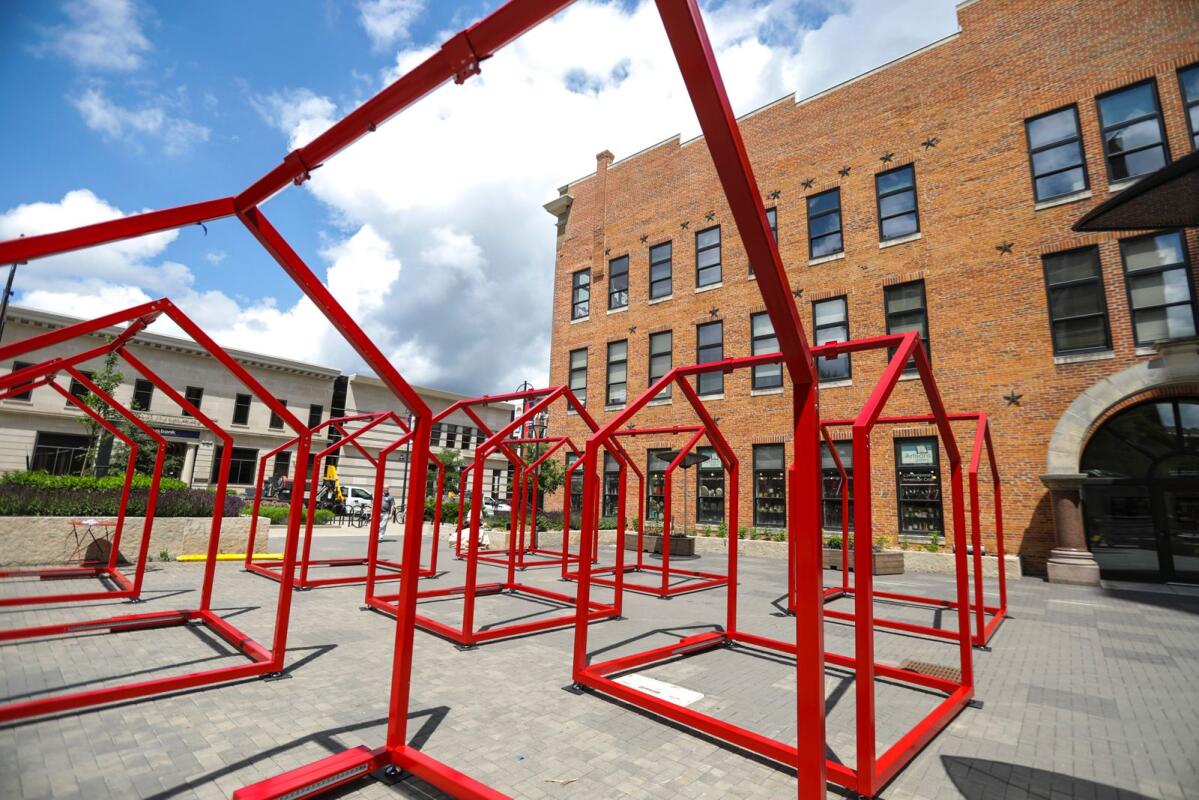 Frames for the Mi Casa interactive swing art exhibit are built ahead of the projects release June 8 at the Pedestrian Mall in Iowa City. (Geoff Stellfox/The Gazette)

Frames for the Mi Casa interactive swing art exhibit are built and installed by members of Creos Art Installations June 8 at the Pedestrian Mall in Iowa City. (Geoff Stellfox/The Gazette)

Frames for the Mi Casa interactive swing art exhibit are built and installed by members of Creos Art Installations June 8 at the Pedestrian Mall in Iowa City. (Geoff Stellfox/The Gazette)

The new set of 16 red swing sets on the Ped Mall, titled Mi Casa Your Casa 2.0, will serve as a conversation starter and fundraiser for the need for affordable housing in Johnson County.

Visitors to the house swings can donate to the cause at no cost to themselves. While the exhibit is in place from June 10 through July 10, the Downtown Iowa neighborhood will donate $1 to the Johnson County Affordable Housing Coalition For every swing selfie posted on social media, simply tag @downtowniowacity with the hashtags #downtowniowacity and #micasayourcasaic.

A QR code will be available for visitors wishing to make an additional donation to the cause.

When: The interactive art installation will be open to the public from June 10 to July 10.

Details: For every swing selfie posted on social media tagging @downtowniowacity with the hashtags #downtowniowacity and #micasayourcasaic, $1 will be donated to the Johnson County Affordable Housing Coalition. Every dollar will be matched by the Community Foundation of Johnson County, allowing swingers to raise up to $5,000.

Although the downtown district of Iowa City offers new interactive art exhibits every summer at the Ped Mall, this year’s interactive exhibit, sponsored by the Community Foundation of Johnson County, is unlike any other in the past. Past initiatives have not provided integrated fundraising opportunities.

The Johnson County Community Foundation will match every donated dollar up to $2,500, meaning each selfie has the potential to donate $2 to affordable housing, up to $5,000 in total.

“We believe housing is a human right,” said Shelly Maharry, executive director of the Community Foundation of Johnson County. “If we can use this beautiful piece of art in this way, we’re happy to start that conversation.”

One of the biggest challenges facing the foundation is the need for affordable housing. Maharry said Johnson County remains the most expensive county in Iowa to live in. A working single parent, for example, needs to earn $19.92 an hour in a standard 40-hour workweek to afford a modest two-bedroom apartment for $1,100 a month.

Someone earning minimum wage would have to work 110 hours a week to afford it. In Johnson County, 61% of renters are considered financially burdened, spending more than 30% of their income on housing.

“We know this is a pervasive problem,” Maharry said. “We want residents to live and work here without having to travel long distances to afford to work here.”

The red frames of Mi Casa, an exhibition that has toured cities around the world, were inspired by Latin American mercados – bustling street markets where human relationships are woven every day. With three-dimensional frames, the art is meant to illustrate warmth, comfort, and security in homes with a basic form instantly recognizable to all.

When a two-person swing is empty, a ring of lights lining the bottom glows dimly waiting for its next visitor. Once someone enters, the lights shine brighter to indicate someone is home.

“It’s going to show up differently depending on how many people are ‘home,'” said Betsy Potter, creative director for the Downtown Iowa City District.

“‘Mi Casa, Your Casa’ is a strong and subtle symbol in a geometric shape that will allow us to build a unique iconic piece, which creates a continuous dialogue with the public and capable of continuous changes and mutations”, said the creators Hector Esrawe. and Ignacio Cadena in a statement.

Drawing inspiration from history, art, music, architecture, books and everyday activities, the design’s goal is to “weave and generate interactions, human connections and emotions , to connect with users and to enhance and translate our heritage and skills into new expressions”. ,” they said.

With something basic that virtually anyone can enjoy, the new art exhibit is much simpler than last year’s loop, which gave visitors the chance to project dreamlike images onto them as they sway from side to side. back and forth. But this year, this simplicity is in order by bringing together all generations.

“With every set up, you’re supposed to have fun, and the swing is one of the activities young and old love to do,” Potter said. “We’re adjacent to the University of Iowa, but we’re home to 2,000 residents, young and old. Everything we do, we try to make it accessible to all age groups.

This year’s project stood out for Potter for its ease of engagement, ease of in and out, and ability to be enjoyed at any time of the day, as the exhibit isn’t so dependent on the elements of ‘lighting. The exhibit comes from Creos, the same Canadian public art agency that donated Iowa City The Loop last year.

More people will be able to use the exhibition at the same time with 16 units, more than the 12 that were available in last year’s exhibition.