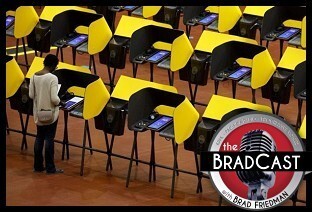 We all woke up to atrocities on Sunday. In Ukraine and Sacramento, California. Russian war crimes in Europe and another mass shooting in the United States BradCast, we detail the atrocities in both places before turning to the fight for the one thing that still has a chance to stop them: democracy. But we can’t have a democracy without voting systems that the public can monitor, and it’s still a huge problem, even in our own Los Angeles County. [Audio link to full show is posted below this summary.]

First, some of the horrifying details recently revealed and evidence of war crimes allegedly committed by fleeing Russian troops against Ukrainian civilians in newly liberated towns, villages and suburbs outside Kyiv. Although seen by independent journalists and labeled by outside watchdogs like Human Rights Watch, which describes some of the crimes as “unspeakable and deliberate cruelty and violence against Ukrainian citizens”, including “rape, murders and other acts of violence”, the Russian government maintains that the accusations are “false” and nothing more than an “orchestrated anti-Russian provocation”. In response on Monday, President Biden reiterated his belief that Vladimir Putin is a “war criminal”.

The horrific body count in the United States also continued to rise over the weekend, as another mass shooting, this time in downtown Sacramento, left six people dead and more than one dozen injured after “at least fifty bullets” were “fired directly into the crowd”. with high-powered weapons during the spirited Saturday night revelry, according to an eyewitness. This, just a day after the Georgian legislature passed a new law allowing concealed weapons to be transported just about anywhere without the need for a license. They are the 23rd state to do so. Our epidemic of gun violence is getting worse, not better, as Republicans refuse to authorize any action that might alleviate America’s shamefully persistent scourge.

But tyranny will not defeat itself. Not in Ukraine. Not in the United States To that end, we remain vigilant in our efforts to help the public attempt to oversee this year’s critical midterm elections. Unfortunately, the problems with our unverifiable and unverifiable voting systems continue into another election year in the so-called “red” and “blue” states. While the GOP is actively undermining democracy with new voter suppression laws in “red” states, vulnerable electronic voting and tabulation systems remain a huge problem across the country.

In 2020, Los Angeles County rolled out a new non-verifiable touchscreen voting system called “Voting Solutions for All” (or VSAP) in the nation’s most populous voting jurisdiction. About a decade in development by County Clerk/Recorder Dean Logan, the new touchscreen (BMD) ballot-marking devices failed spectacularly in that year’s Super Tuesday presidential primary. , resulting in long queues and questions about results. The VSAP system had been conditionally certified by the Secretary of State just weeks before their first countywide use, after state tests uncovered about 30 different violations of California’s voting system standards.

The county was required to correct the violations detailed in the conditional certification within months of the election, although it failed to do so in many cases – for years. Now the county is seeking state certification of VSAP v3.0 but, according to our guests today, has still failed to fix a number of critical security issues that failed over 100 years ago. two years.

We are gathered today to discuss these concerns ahead of the June 7 midterm primary elections in California in SUSAN VERTHALGHSenior Advisor on Election Security at the non-profit organization Free Speech for People and by IAN PATTON of the Long Beach Reform Coalition (he is also a candidate for Long Beach City Council). Both recently wrote a letter [PDF] at California Sec. of State Dr. Shirley Weber, detailing unpatched security issues in the VSAP system and urging her to force LA County to fix them before re-certify the recently updated voting and counting system.

We’ve also invited LA County Registrar Dean Logan – the VSAP system is his brainchild – to join us as well, after his office recently described Greenhalgh’s public testimony about his certification concerns for VSAP 3.0 as “disinformation and disinformation”. By refusing to join us today, Logan once again accused Greenhalgh and Patton of ‘stating the wrong facts’ and brushed off election integrity advocates smearing them as if they were part of the crowd of Donald Trump conspirators offering claims without evidence of fraud since his 2020 loss. Logan blamed the documented concerns detailed in Greenhalgh and Patton’s memo to the secretary “helping to deepen the false narrative about integrity and transparency elections that pervades the country”.

For her part, Greenhalgh has been an expert on election security, integrity and transparency for decades. Patton had represented the Long Beach Reform Coalition in a lawsuit against VSAP systems long before Trump’s sore loser act in 2020, when a ballot initiative in Long Beach failed by just 16 votes. After the Coalition raised tens of thousands of dollars to pay for the recount of this initiative, Logan informed them that the price would, in fact, be hundreds of thousands of dollars instead – to count just a few thousand votes. . The reason, as we reported at the time, is that the new VSAP system is being rolled out to county voting centers, which have replaced community precincts. This means Long Beach voters can vote at any polling center in the county, where more than 4 million people voted in 2020. Logan tried to charge the Coalition for the hours and hours he would have taken the county to discard some 4 million ballots. (computer-tagged by VSAP and hand-tagged by voters by mail) to find those cast by Long Beach voters at one of the county’s hundreds of voting centers. Of course, that’s just another problem with the polling center model, especially in larger counties like LA.

Greenhalgh details security vulnerabilities that remain in the VSAP system, despite state requirements that they be patched last year. She was also surprised to learn that Logan claimed in his email that “the VSAP 3.0 upgrade is complete and has been approved by the Secretary of State.”

“I’m disappointed the secretary isn’t taking additional steps to enforce these requirements, to really require LA County to meet them,” she tells us. “Also, this has not been updated on the website, that it has already been approved. This is not public information yet.” We’ll just take Logan’s word for it, I guess.

For his part, Patton explains the abortive recount effort in Long Beach (“I am by no means a conspiracy theorist,” he notes. “We never alleged a rigged election. We were just talking facts. The facts are it was an extremely close election, and we just weren’t allowed to count by hand.”); the fact that LA’s $300 million voting system was promised to be the country’s first open-source system (but has yet to reveal any of its source code); and whether he is confident that his election to city council this year will be accurately counted under the new yet unverifiable and virtually uncountable systems.

“We can speak very factually and say that vulnerabilities don’t amount to a stolen election,” Greenhalgh argues, before describing Logan’s slander as “hugely discouraging.” She described the comments as “a new low to hear someone trying to smear and smear real serious issues, real serious issues that need to be addressed. We still have serious security issues in our election systems that need to be addressed. We all need to And if we have election officials who refuse to address these issues by mislabeling them as misinformation and disinformation, there are two problems with that: we’re not actually going to address the issues, but we have a crisis of confidence in our electoral system right now. And when someone in a position of power says something that quite easily turns out to be wrong…they won’t have much faith in their ability to run for an election. And we can’t afford it. He has to be honest.

Logan never cited specific claims regarding Greenhalgh and Patton’s concerns that he believed to be misinformation, despite my repeated request. He has a standing invitation to join us on the show at any time to do so. It is unbecoming of a public official to hide behind false claims of “stolen elections” from the right, especially when the very specific concerns in question are legitimate and publicly well-documented.

There’s a lot more talk about it on today’s show, and concerns about Similarly unverifiable touch-screen ballot-marking devices now used across the country, as well as the equally problematic voting center model replacing community precincts in other counties and states.

This year’s California primary will take place on June 7. Cross your fingers that things work out. Good luck, even to be able to understand afterwards if they did it or not…

While we publish The BradCast here every day, and you can hear it on all of our great stations and affiliate websites, to automatically get new episodes as they become available, sent straight to your computer or personal device, subscribe for free on iTunes, Stitcher, TuneIn or our native RSS feed!

[Cross-posted from The BRAD BLOG…]