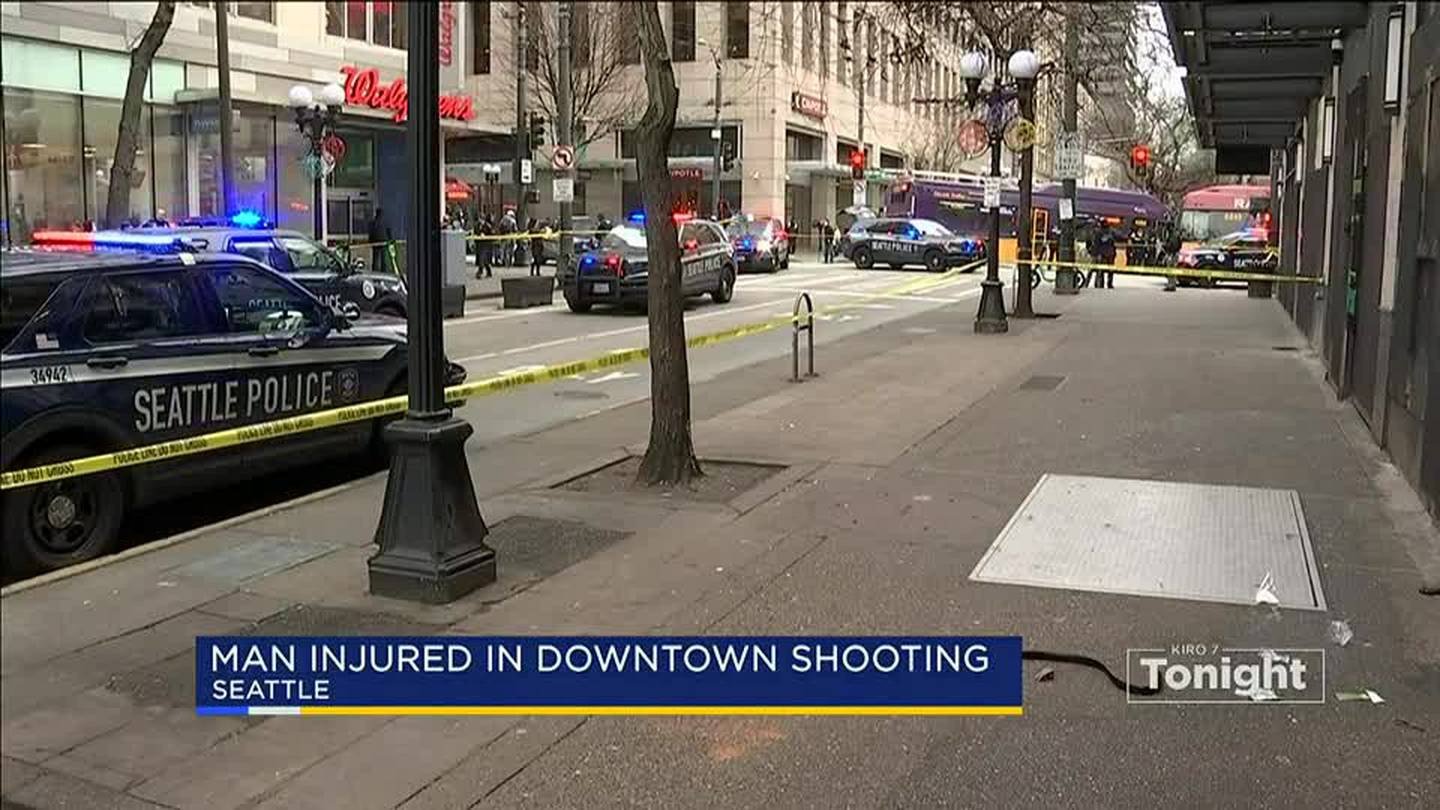 SEATTLE — A 31-year-old man who was injured in a Wednesday afternoon shooting in downtown Seattle had a handgun and drugs on him, police said.

The shooting happened at 2:10 p.m. at Third Avenue and Pike Street, where officers responded and found a man with a gunshot wound to the hip.

Authorities said when officers began first aid, they discovered the man was carrying a handgun and drugs in a fanny pack.

The man was taken to Harborview Medical Center for treatment.

Witnesses told police that the victim and shooter got into an argument, which led to gunfire.

Police say an associate of the victim may have exchanged gunfire with the shooter.

Ballistic evidence was recovered from the scene, including from a damaged metro bus.

Officers said they seized the victim’s drugs, approximately 14 grams of heroin, 3 grams of methamphetamine, 82 fentanyl tablets and his weapon. The man is a convicted felon who is not permitted to carry a firearm, law enforcement said.

The intersection where the shooting happened is no stranger to crime.

Last December, a person was rushed to hospital with serious injuries after being shot.

In October, two men were stabbed in broad daylight.

A few weeks before this incident, a 35-year-old man was shot and killed.

Newly elected Mayor Bruce Harrell acknowledged there was a problem and said people deserved to feel safe, issuing a statement that read in full:

“Every Seattle resident deserves to feel safe in our city, but repeated incidents of gun violence threaten and damage our collective sense of public safety. My office is committed to taking comprehensive and urgent action to address this preventable public health crisis. Our solutions must be both reactive and proactive.

“That’s why, in my first month in office, I hired a gun violence prevention coordinator to work directly with those affected by gun violence and to help coordinate and drive awareness. and community solutions.

“I will continue to advocate for and support appropriate staffing levels at SPD to ensure prompt responses to public safety emergencies and thorough investigations of acts of gun violence.

“And I will advocate for new investments like pilot programs for proven technologies like automatic gunshot tracking systems, as well as regional coordination and legislative changes that allow us to pursue new policies to combat the epidemic of gun violence.”

The crime has affected small and large businesses in the area. The Downtown Seattle Association released a statement that reads in full:

“For too long our city has essentially ceded Third and Pike to criminal enterprises and it’s time to put these people out of business. We need urgent action to get rid of illegal activity in this region before more people are injured and more lives are affected.

The investigation into Wednesday’s shooting is ongoing.