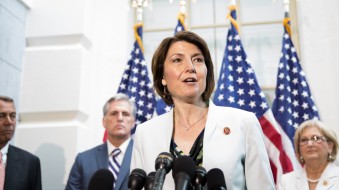 In the spirit of Earth Day, Rodgers urged the president in a letter to travel to Puget Sound and see firsthand the irreparable damage the dumping of raw sewage is causing to salmon and orca populations in Critically Endangered, the water quality of Puget Sound and the wider ecosystem. She also highlighted the critical role the four Lower Snake River dams in eastern Washington play in providing clean, reliable, renewable, and affordable energy to the Pacific Northwest, while helping the United States reduce carbon emissions.

His letter also encourages the president to see how progressive policies at the local, state and federal levels have led to rampant drug abuse and a dangerous increase in violent crime in cities across America.

The full letter is below and available here.

I’m glad to hear that you will be visiting Seattle, Washington later this week, which coincides with the Earth Day celebration. I wanted to draw your attention to the environmental devastation caused by the continued pollution of Puget Sound and the inhumane living conditions in downtown Seattle.

As you will see if you visit, Puget Sound is in crisis. Puget Sound salmon — which is most critical for killer whales — is in crisis. Yet the city of Seattle continues to allow millions of gallons of raw sewage to dump into Puget Sound each year, despite the scientifically proven correlation between pollution and declining salmon populations. On top of that, Governor Jay Inslee has considered allowing 58 sewage treatment plants to continue illegally dumping toxins into the strait. I hope you will go and see for yourself the irreparable damage this is causing to critically endangered salmon and orca populations, to the water quality of Puget Sound, and to the entire ecosystem.

To clean up our environment and save endangered salmon, we need to take action to clean up Puget Sound and hold polluters accountable, not turn a blind eye. Instead, Gov. Jay Inslee and many in the environmental community have focused their efforts on targeting the four Lower Snake River dams in the east of the state, which provide the Pacific Northwest with a clean, reliable, renewable and affordable energy.

Even the Environmental Quality Council within your administration is actively studying the failure of these dams, which allow the passage of 95% of juvenile fish and produce nearly 1,100 megawatts of hydroelectricity per year. I hope that while you are in our state, you will remind officials here of the need for more clean, renewable energy, not less. I also encourage you to learn more about the immense benefits the Snake River dams and our entire river system bring to our state and region.

While I know you’re not visiting the eastern part of the state, let me point out that removing the dams from the Lower Snake River would do little to achieve our shared goal of restoring endangered salmon. demise and undermine legitimate carbon reduction efforts in the United States. . This approach is wrong and I hope you and your administration will work to protect our dams and clean up Puget Sound.

During your visit, I encourage you to visit downtown Seattle to see firsthand how progressive policies at the local, state, and federal levels are destroying America’s great cities. If you do, you’ll see how homelessness has taken over with tent cities springing up everywhere, serving as ground zero for drug addiction and violent crime, devastating community safety and the ability of small businesses to stay open. Since you took office, violent crime has increased across the country, including 20% ​​in Seattle and 10% in Spokane. Just last month, two Washington state law enforcement officers were shot and killed in the line of duty.

In addition, deadly drugs continue to flood the streets and tear families apart. Back home in my community, illicit fentanyl seizures have jumped 1,100%, exacerbating the opioid crisis responsible for killing a record 100,000 people every year. It is as if a weapon of mass destruction had exploded in our communities. I hope you will work to solve these problems that turn beautiful cities into dangerous communities that people don’t feel safe to live in and visit.

These are real crises affecting real people in Seattle, my district in eastern Washington, and people across the country. The American people need answers and solutions. During your visit, I hope you will take the time to see these issues with your own eyes and make a good faith effort to understand how they are the direct result of failed policies.