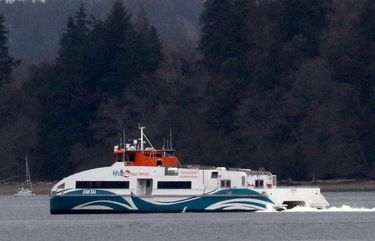 the 255-berth Enetai vessel made four exhibition trips on Saturday through Puget Sound to Elliott Bay, where a total of 325 passengers rode at speeds reaching 42 mph. It’s faster than taking a state ferry to Fauntleroy, followed by a bus or car ride through West Seattle to downtown.

“It stayed smooth and level, it didn’t list side to side. I’m very happy this vessel is on the road,” said Joel Sparrow, a longtime commuter between Southworth and the international district of Chinatown in Seattle.

Sparrow predicts the direct trip will save hundreds of people an hour each way. Before COVID-19, many park-and-rides combined with a state ferry to Vashon, followed by a King County foot ferry from Vashon to downtown, he said.

The Enetai, built by Nichols Brothers Boat Builders of Whidbey Island at a cost of $12.5 million, is funded by local sales taxes, which also support passenger ferries from Bremerton and Kingston to Seattle.

The Southworth Ferry will make eight regular trips in each direction a weekday, with fares $2 to Seattle and $10 to Southworth – but free in April.

An estimated 140,000 passengers a year are expected to travel, and bus service is being increased to the platform, Kitsap Transit spokesman Sanjay Bhatt said. Like other Kitsap and King County passenger ferries, bike racks are available on board.