Official documents on what voters will approve; Answers to some public questions 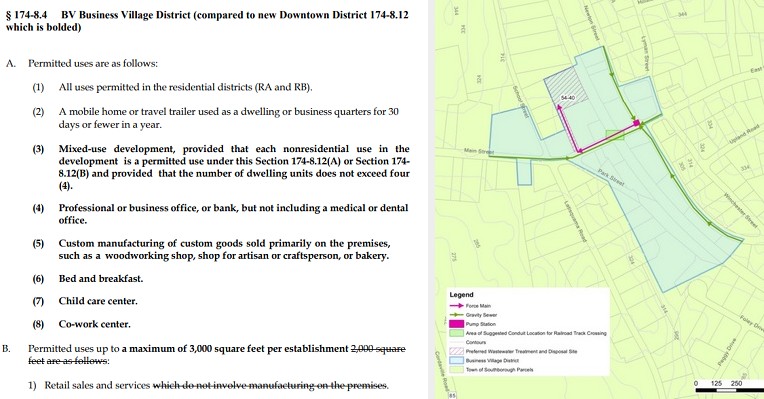 Above: More information on the zoning article being voted on and questions raised about a project that officials can pursue afterward.

The special fall municipal assembly will take place in six days. The article that has captured the most attention of readers is certainly the proposed zoning changes for the downtown area.

I follow up on some of the questions in the wastewater treatment blog comments. (Scroll down for that.)

In addition, I am happy to see that the City has posted the official version of the amended article. Voters will be asked to vote. (This will replace the version published in the Terms of Reference.) They also released the board’s analysis of how passing section 10 will cause differences between the current zoning and the proposed zoning. (I would call it a document with red lines, but it doesn’t use colors.)

[On Friday, I posted my own analysis with charts comparing current and proposed zoning. You can look at that here.]

For those who have not closely followed the zoning by-law, these changes would only apply to parcels identified as being rezoned to be part of the new “Downtown District”.

There are lots that will remain in the Business Village Zone. (These are the parcels divided between the company and a residential area, as well as the property currently owned by the railway company, CSX.)

Below, I share some background and links related to questions and complaints regarding the costs the City could incur if the zoning were adopted.

Several blog comments asked about the City’s plans for a wastewater treatment facility. Some have argued that the zoning would pave the way for forcing voters to pay for a facility that benefits developers.

If a bill was proposed to be paid for by Southborough taxes, the voters in the town hall would have to pass it. However, while the zoning change requires 2/3 approval, funding for downtown infrastructure may not be. (If a project was funded without the City issuing a bond or triggering the 2½ proposal, only a majority should support it.)

So what type of project are we potentially considering?

In February 2019, the Economic Development Committee organized a forum to reflect on the challenges of downtown revitalization. In it, the public was made aware of the severe septic limitations preventing the development of certain commercial properties such as restaurants.

EDC sued and received a grant to study how to fix septic problems (and to help with the zoning effort). A wastewater treatment feasibility study was conducted to “assess an independent treatment option” of up to 20,000 gallons of wastewater per day in the current village business district area.

The study estimated that a project (map on the right); would cost $ 3,298,000. (Click here for a conceptual drawing of a downtown factory.)

The consultants, Weston & Sampson, recommended continuing grant funding. They also recommended a follow-up study on how the project could be funded outside of grants.

The second report offered several options. He looked at full taxpayer funding, split funding with an account funded by properties that would benefit directly, and a property tax. He listed the pros and cons of each scenario. (You can find all documents related to the Wastewater Scholarship here.)

Note that the cost scenario tables do not assume any compensation from state or federal subsidies. City officials have said they hope to secure grants for any expensive infrastructure projects.

The study reports were published in June and July. In August, EDC discussed the status of reports and grants. But there was no presentation of the content or discussion of the next steps for the wastewater treatment project. The Selectmen Board has not yet included the reports on its agenda for discussion.