‘Our families are dying’: Protesters shut down freeway in downtown Seattle 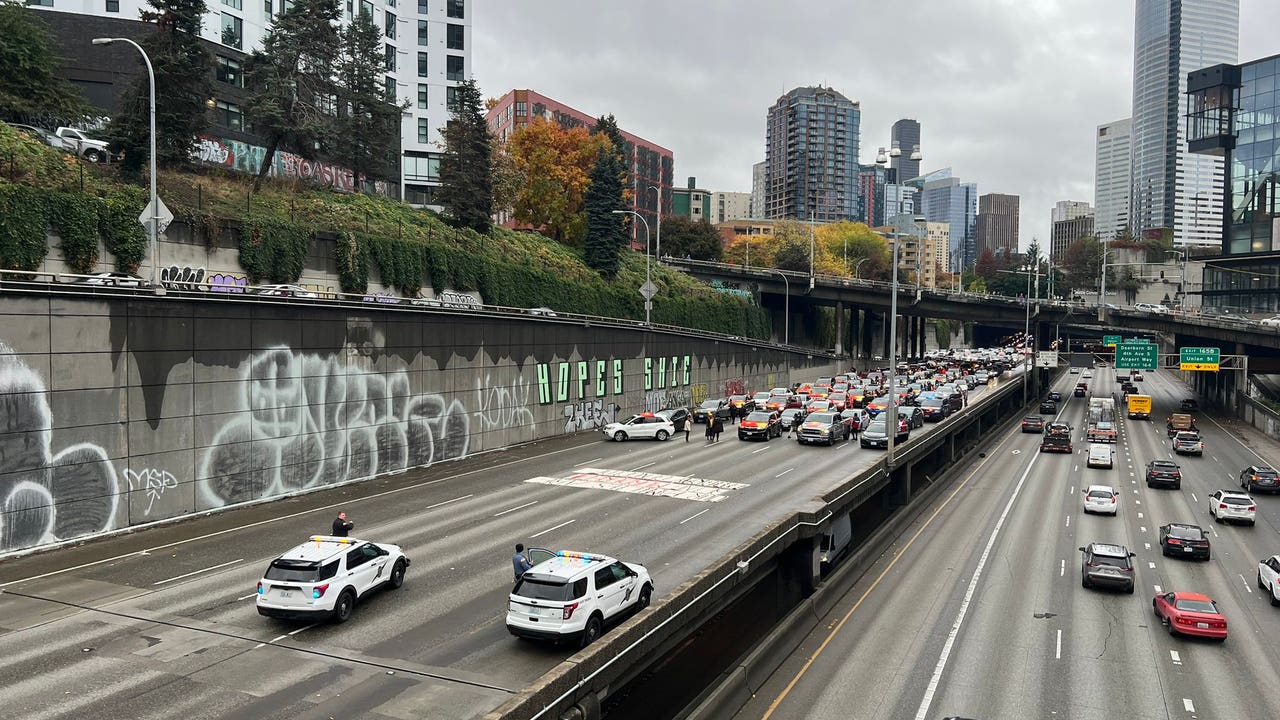 Protests blocked northbound I-5 for more than an hour

Drivers were diverted after exiting Mercer Street as protesters blocked all lanes of northbound I-5. The lanes have since reopened.

SEATTLE – All lanes of I-5 North were closed for about an hour Friday afternoon at downtown seattle due to a protest.

Footage from the scene near the Olive Way exit shows several vehicles with the Tigray flag on the hoods of their cars.

RAW VIDEO: Protesters block all lanes of I-5 north in downtown Seattle

According to the Washington State Department of Transportation (WSDOT), all lanes of I-5 north were blocked at Lakeview.

FOX 13 spoke to two of the protesters, Helen and Fedilla, off camera.

They were on the ground but for the safety of their families in Tigray, they wanted to remain anonymous.

“Our families are dying, our children, their children are being slaughtered,” Helen said.

“We don’t know if anyone is alive or dead or what is the case,” Fedilla said.

They were part of the peaceful caravan, which turned into a headache for the bottled, they said they did it for their loved ones, living a humanitarian crisis.

“It’s not a political issue, it’s ethnic cleansing, they won’t stop until all of Tigray is dead,” Fedilla said.

Friday, November 4 marked two years since the start of the war.

During this time, these demonstrators and thousands of others have been unable to communicate with their families.

Protesters were seen waving flags, standing and chanting out of their cars as they say 91% of people in Tigray are starving.

“Nobody wants to be on the freeway, endangering anyone or inconveniencing people, but it’s kind of like desperate times call for desperate measures,” Fedilla said.

Fedilla says a peace treaty was signed two days ago, but the situation only got worse after Ethiopia bombed Tigray four hours later.

“Then they bombed them again the next day, so we see it’s not about peace,” Fedilla said.

The war is now one of the deadliest conflicts in the world, globally, now called the forgotten war, until now.

Dozens of people stopped alongside Denny to find out what was going on.

Ashley Farber and Austin Cassell were two of them.

“Unfortunately, sometimes it comes down to issues like this where you have to step out and cross that line to make sure things are heard,” Farber said.

She was happy to see a peaceful protest, while it’s illegal, she supports them.

“I absolutely plan to go home after I finish my training and investigate more as a black man in Seattle, I want to know more about what’s going on in Ethiopia,” Cassell said.

It is proof that their message has been heard and is sparking conversation in our community.

“I want to apologize for the inconvenience, but I’m very proud that we were able to get this message across,” Fidella said.

The protest brought out WSP made it clear that it was illegal to block the freeway and asked them to disperse.

When asked if they would agree to be taken into custody, the protesters did not hesitate.

“Absolutely, absolutely, my family is dying,” Helen said. “The least I can do is get myself arrested by raising awareness.”

The protest remained peaceful as dozens of protesters returned to their cars, honking their horns as they drove away, allowing traffic to resume.

No one has been arrested.

A banner on the surface of the highway read “Our families are murdered! Genocide in #Tigray”.

A protester told FOX 13 News the group was ready to go to jail for blocking the freeway. The protesters said they were demonstrating two years after Ethiopia’s deadly war began.

Anyone traveling in the region should expect delays. Check out our live traffic map here.

Protesters block all lanes of I-5 North in downtown Seattle

This comes two days after the warring parties signed a “final cessation of hostilities” in a war that would have killed hundreds of thousands of people.

One of the pact’s priorities is to quickly disarm Tigray forces with heavy weapons and withdraw their “light weapons” within 30 days. Senior commanders from both sides are to meet within five days.

Ethiopian security forces will take full control of “all federal facilities, installations and infrastructure…in the Tigray region”, and an interim regional administration will be established after dialogue between the parties, the agreement says. The terrorist designation for the Tigray People’s Liberation Front party will be lifted.

If implemented, the agreement should mark the end of the devastating conflict in Africa’s second most populous country. Millions of people were displaced and many remained close to starvation under a blockade of the Tigray region of over 5 million people. Abuses have been documented on all sides.

Prime Minister Abiy Ahmed said his government had received everything it asked for in the peace talks.

“During the negotiations in South Africa, Ethiopia’s peace proposal was 100% accepted”, and the government is ready to “open our hearts” for peace to prevail, Abiy said in a speech. He added that the issue of disputed areas, considered one of the most difficult, will only be resolved through the law of the land and negotiations.

Neither the Ethiopian government nor the Tigray negotiators responded to questions.

As part of the comprehensive agreement, both sides agreed not to make any unilateral statements that would undermine it. The agreement also calls for the “immediate cessation of all forms of hostile propaganda, rhetoric and hate speech”. The conflict has been marked by language that US special envoy Mike Hammer, who helped with the peace talks, described as having “a high level of toxicity”.

“The human cost of this conflict has been devastating. I urge all Ethiopians to seize this opportunity for peace,” UN Secretary-General Antonio Guterres told reporters on Thursday, one of several messages from observers expressing cautious hope.

Huge challenges await us. The opaque and repressive government of neighboring Eritrea, whose forces fought alongside Ethiopian forces, had no comment, and it was unclear whether Eritrean forces had begun to withdraw. The agreement stipulates that Ethiopian forces will be deployed along the borders and “will ensure that there is no provocation or incursion on either side of the border”.

Mustafa Yusuf Ali, an analyst at the Horn International Institute for Strategic Studies, said building trust will be crucial. The agreement “must be coordinated, it must be systematic, and above all it must be sequenced so that the Tigrayans are not left to their own devices after having surrendered all their weapons and then suddenly they are attacked from the center,” he said. .

The agreement sets timeframes for disarmament, but nothing else, although it says the Ethiopian government will “expedite the delivery of humanitarian assistance” and “accelerate and coordinate the restoration of essential services in the Tigray region. within the agreed time frame”.

The UN and the International Committee of the Red Cross said they had not yet resumed the delivery of humanitarian aid to Tigray, whose communications, transport and banking links have been largely cut off since the start of the fighting. Some basic drugs are sold out.

“It is not surprising that it may take some time to get the word out to the relevant authorities on the ground. We are in contact with them and trying to obtain this unimpeded access as soon as possible,” said the UN spokesperson. the secretary general, Stéphane Dujarric, told reporters.

An aid worker in Tigray’s second-largest city, Shire, said there had been no sound of gunfire in the past few days, but people and vehicles were still prevented from moving freely . It was also quiet in the city of Aksum, another aid worker said. Both spoke on condition of anonymity for fear of reprisals.

Residents of Tigray’s regional capital, Mekele, were nervously awaiting the next steps.

Asked about the peace accord, resident Gidey Tsadik replied: “It’s good. Everybody is happy. However, it is not known exactly when we will have this peace.

Tedros Hiwot said residents had not heard of the resumption of basic services. “We need this to happen quickly,” he said.

Tigrayans outside the region said they still could not reach their families by phone. “I hope this will be an opportunity to reconnect with my family,” said Andom Gebreyesus, who lives in Kenya. “I miss them and I don’t know if they are alive.”

At a memorial service in the capital, Addis Ababa, for soldiers killed in the conflict, Defense Minister Abraham Belay spoke of “the very complex and difficult reconstruction work ahead of us”.

This is a developing story. The Associated Press contributed to this report.