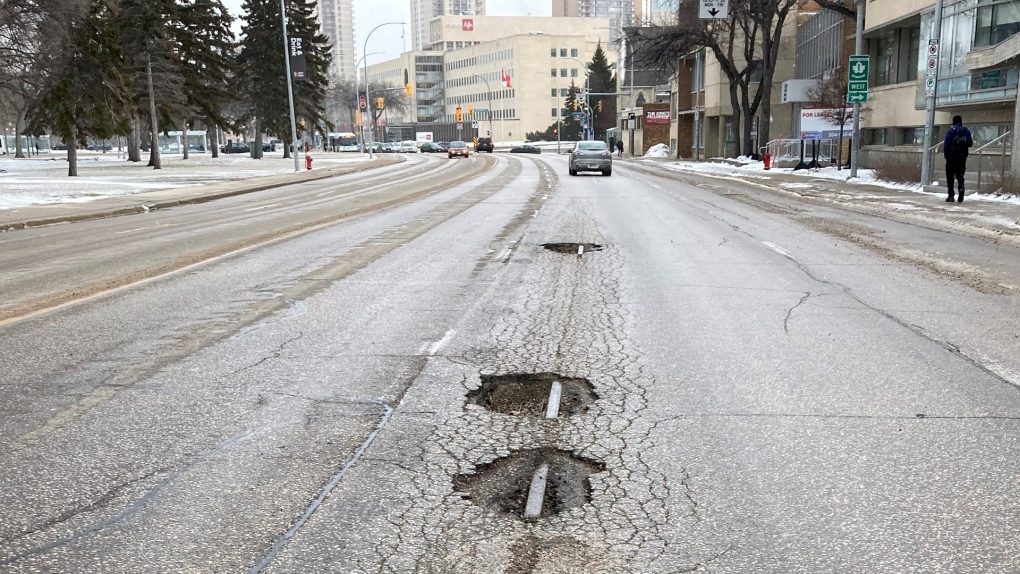 It’s pothole season in Winnipeg, but some potholes are so deep they’ve revealed an interesting part of Winnipeg’s history.

Decades-old rails were revealed by a stretch of potholes on Osborne Street this week.

“What you see are remnants of the streetcar system that once served Winnipeg,” said Fred Headon, a retired educator who has written two books on Winnipeg’s railroads and is working on a third volume.

“Rails were installed on the main roads, and cars, buses and everything else shared the roads with trams.”

The last of the streetcars rolled through Winnipeg on Sept. 19, 1955. The city then removed a lot of the rails, Headon said, but not all of them. In many cases, he says, it was cheaper to leave the railroad ties in the ground.

The last of the streetcars passed through Winnipeg on September 19, 1955. (Source: Archives of Manitoba)

“The quickest and easiest way was to just asphalt over everything, and when that asphalt thins out, the rails reappear,” he said.

This isn’t the first time Winnipeg’s history has peeked through cracks in the concrete. CTV News previously reported that the stretch along Osborne Street exposed old train tracks in 2014.

The streetcar has become a historic symbol in Winnipeg – a reminder for many of the 1919 General Strike. A permanent art installation at the Pantages Theater Plaza displays the iconic image of an overturned streetcar on June 21, 1919 – a day that would become the Winnipeg’s Bloody Saturday.

Headon said the light rail system also had a huge impact on Winnipeg’s development – acting as a conduit for people downtown as the city began to expand outwards.

A city spokesperson told CTV News that when a street is completely rebuilt at the end of its lifespan, all streetcar tracks are removed. But while the tracks remain, Headon said Winnipeggers who see them peering through a gaping pothole in the road should be grateful for the role the tracks have played in the city’s history.