Protesters march through downtown Seattle, arrests made for property damage 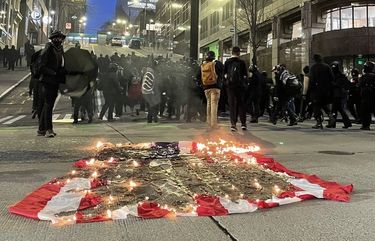 President Joe Biden’s inauguration was met Wednesday night in downtown Seattle with scattered protests and property damage from anti-fascist marchers who have been demonstrating for months.

A group, which numbered around 100 protesters by early evening and then dwindled in size, marched through the city center and called for the abolition of immigration and customs. In chants, they denounced both former President Donald Trump and Biden.

Police made at least three arrests as of 9 p.m., for property damage, burglary and assault, according to Seattle police.

Outside the ICE offices on Second Avenue and Spring Street, several people in the crowd lit an American flag on fire. Some spray-painted and smashed three windows in a building that houses an AmazonGo store. “Amazon uses $2 fund technology for ICE,” one tag read.

As the group gathered in Occidental Square, a protester said watching Biden call for unity at his inauguration felt like an insult to those wronged by racism, xenophobia and homophobia.

“Calling for unity with people who actively want to hurt people is disgusting,” said the protester, who gave Anna’s name.

The Biden administration cannot be counted on to ‘significantly change’ immigration policy without public pressure, said one protester, who gave the initial D but declined to give a full name, citing doxing fears.

“I don’t think immigration should be violently enforced,” the protester said, suggesting social workers and others deal with immigration rather than law enforcement.

“Last night’s violence and destruction in downtown has no place in our city or our democracy,” said a statement signed by Pike Place Market Preservation and Development Authority Executive Director Mary Bacarella, Seattle Metropolitan Chamber President Rachel Smith, Visit Seattle President Tom Norwalk and Downtown Seattle. The association’s president, Jon Scholes. “Every elected official in Seattle should speak out against these extremists immediately.”

After the AmazonGo store was vandalized, police arrived and followed the group in vehicles, on bicycles and on foot, eventually issuing a dispersal order. After a scuffle between a member of the crowd and another person, police tackled and arrested the protester dressed in black.

Inside the Henry M. Jackson Federal Building on Second Avenue, about a dozen officers stood guard in tactical gear with ICE and Department of Homeland Security badges. Some wore gas masks.

Later, about 40 of the protesters marched through downtown, Pike Place Market and South Lake Union, smashing the windows of the Pike Place Starbucks. Police rushed to the market and made at least one arrest.

In South Lake Union, a line of officers on bicycles rode single file to guard Amazon spheres and an AmazonGo store as protesters chanted, “We protect people, you protect property.”

Police said the three arrests relate to a 22-year-old man suspected of causing property damage to the courthouse, a 29-year-old woman accused of assaulting a person and kicking an officer, and a 33-year-old man. years suspected of ownership. damage and burglary at Starbucks.