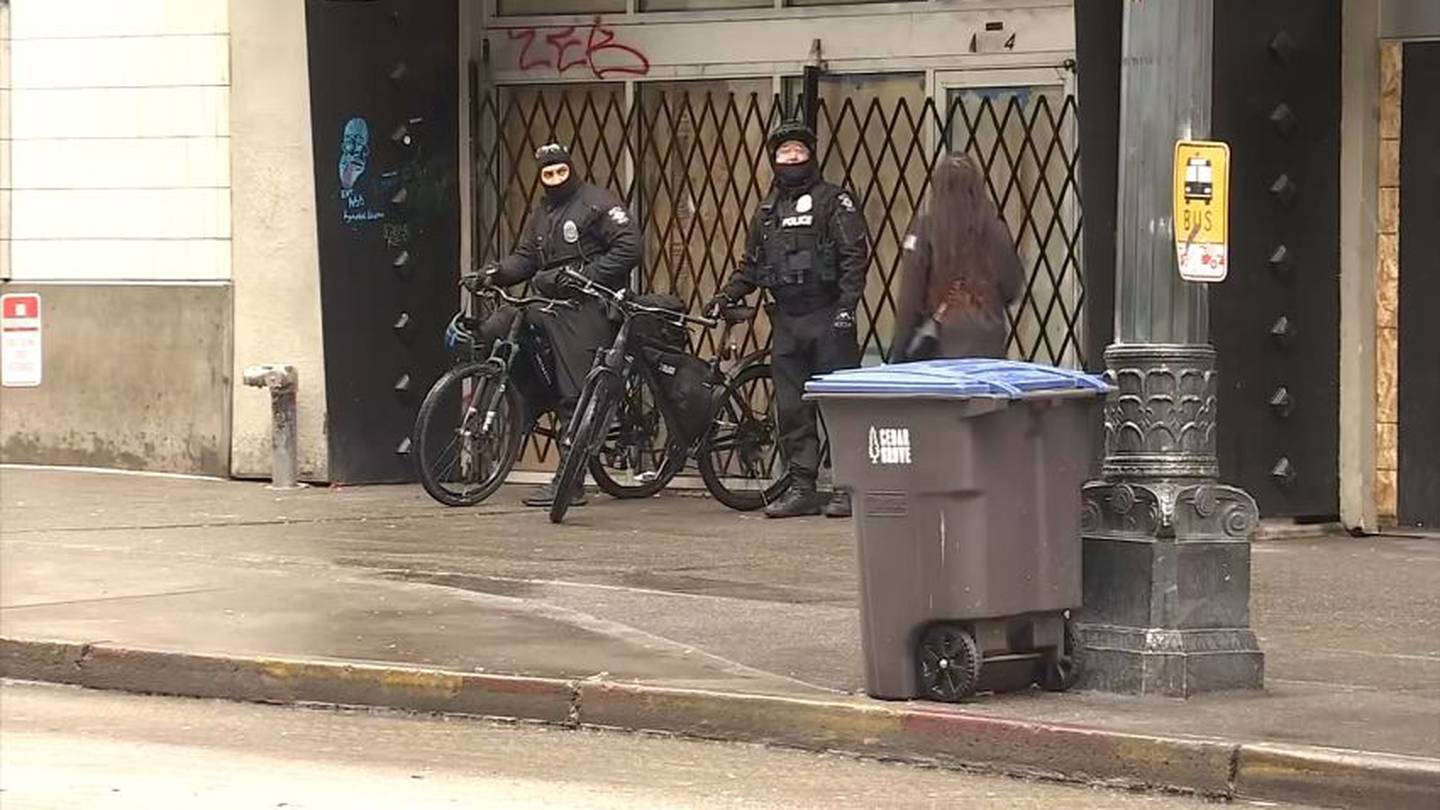 SEATTLE — An outbreak of violence is causing change in downtown Seattle. The police department is increasing its presence in the troubled neighborhood near Third Avenue and Pine Street.

This is where a 15-year-old boy was murdered Wednesday evening around 7:30 p.m. This is the third shooting in 10 days several blocks away.

Residents of the neighborhood woke up Thursday to a mobile police station and a heavy police presence of officers on bike patrol. The Third Avenue block between Pike and Pine Streets was also clear of the usual mass of people there.

That’s the reaction of most downtown folks. But many say it wouldn’t have taken the murder of a teenager for the block to be cleared.

“What really concerns us is to stop it. To have a 15-year-old shot here at 7:15 p.m. is just devastating and unacceptable,” Seattle Police Department Detective Valerie Carson said Wednesday night.

Seattle Police Chief Adrian Diaz said in a statement On Thursday afternoon, the police department “will launch an initiative to curb violent criminal behavior in the area surrounding 3rd Avenue between Pike and Pine St.”

A mobile SPD neighborhood is now at 3rd and Pine after a 15-year-old was shot and killed last night.

Neighbors say they are relieved to see the mob openly using drugs – but say it shouldn’t have taken the murder of a child.

They worry when the police leave, trouble will come again. pic.twitter.com/RTfzJKk7sM

“Sometimes I don’t want to work late because I think maybe I’ll be the one to get shot,” Davis said. “You come here and it’s an open drug market,” he said.

He asks the mayor to make changes.

“I wish the mayor had fewer press conferences and I wish he would tell the police to enforce the laws as they are written,” Davis said.

“These continued acts of violence and disorder in the streets are unacceptable and beyond tragic. My heart is filled with sorrow. … We are launching a comprehensive and collaborative approach to deal with this crisis.

The current police presence in Third and Pine is similar to the response Seattle police launched nearly two weeks ago at 12th and Jackson in Little Saigon, another hotspot.

“Before, there were about 100 people here at any one time,” said Taylor Coon, a resident of Little Saigon. “Just an outdoor drug market,” he said.

After a series of shootings there, the police set up a mobile police station.

“Everything is clear now, which is definitely an obvious improvement. We couldn’t even be here a week ago,” Coon said.

But some people say the crowd just moved on.

“They’re going to kick them out and you hear them talking to each other. Oh, let’s go down there,” said Carlos Manuel, who was working in Little Saigon on Thursday. “It was a huge amount, but now they’ve narrowed down to three or four ‘sellers’ per corner if you want to call them that,” Manuel said.

In the past two weeks since 12 and Jackson were cleared, violence near 3 and Pine has escalated with three shootings in 10 days, including fatal incidents on Sunday and Thursday nights.

“We charge for each shooting case that is referred to us,” said Casey McNerthney, spokesperson for the King County District Attorney’s Office.

McNerthney added that his department has yet to receive documents from Seattle police to file charges for many recent crimes.

“We know they are working very hard to get the cases to us. In the end, most cases were not sent to us. But that doesn’t blame the police,” McNerthney said. “We know the Seattle Police Department has lost several hundred officers to where they’re supposed to be,” he said.

Diaz said patrol officers from the 12th and Jackson would be replaced with non-patrol personnel to staff the mobile compound there, to free up officers downtown.

The full statement from Mayor Harrell’s office is below:

“These continued acts of violence and disorder in the streets are unacceptable and beyond tragic. My heart is filled with grief for the victims – for the traumatized individuals and families; for downtown residents, workers and businesses who have no choice but to live and work alongside recurring crime and gun violence; and for the people of Seattle who should see downtown as a thriving beacon for our city and region, but continue to see a hallway defined by chaos, dysfunction, and tragedy.

“As these issues have been brewing for years, my administration is taking urgent action by increasing police presence and working to activate downtown. Ensuring visible and lasting change requires additional efforts. In conjunction with the Chief Diaz, law enforcement partners and community advocates, we are launching a comprehensive and collaborative approach to address this crisis.

“These issues have only strengthened my resolve to restore and strengthen the understaffed police department I inherited. We need more officers to meet our public safety needs. As mayor, it’s my job to be our city’s top recruiter. To those who share my belief that Seattle should be safe for everyone, I encourage you to be part of the solution and consider applying to join our police department today.

“In One Seattle, we believe that everyone has the absolute right to feel safe. Despite our best efforts at the start, it’s clear that we’re not there yet. Until then, One Seattle means feeling shared grief when crime and violence impact our communities, as well as a shared commitment to do better.