Spokane’s homeless system may be growing, with more beds offered to help people ‘get on better terms’ 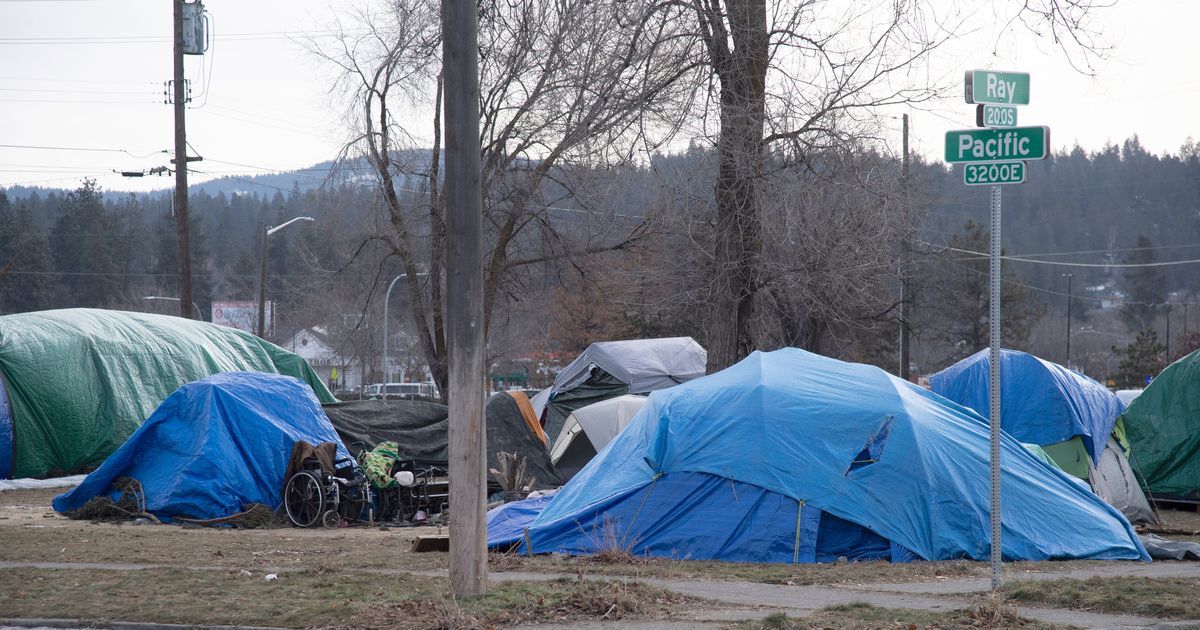 The homeless encampment along East Second Avenue near Interstate 90 has been growing year-round.

As of Thursday morning, more than 300 people were living there, said Julie Garcia, who runs the camp through her organization Jewels Helping Hands. Tents and vehicles cover the entire block between Ray and Ralph streets on property owned by the Washington State Department of Transportation.

Called Camp Hope, it sprung up following protests at City Hall and after the city closed its temporary heat shelter at the convention center in early January, which was its last ditch effort in any type of shelter. heating this winter.

The tents, the campfires, the RVs and cars, the tarps – the whole existence of Camp Hope has been a sign of a broken system.

Now, seemingly suddenly but in fact after months and months of effort, collaboration and conflict, a long overdue change at Camp Hope – and the city’s overall shelter system – seems imminent.

The city has asked for bids for a shelter operator, and while there hasn’t been an official announcement of the specific location, the plan is to add a 250-bed facility to the system, with room for more if needed.

If the plan holds up – and is not accompanied by cuts elsewhere or other poison pills – the increase would be a major addition to the system’s capacity.

“We think there are ongoing conversations where the city could get closer to a facility,” said WSDOT regional administrator Mike Gribner.

The WSDOT took no action to remove the campers because there was nowhere to go, Gribner said.

Although the camp’s presence raised concerns among neighbors, with no adequate shelter in some of the coldest months of the year, the agency was unwilling to simply drive people away.

As soon as that changes, however, the agency wants the camp emptied.

“It will be done in the most humane way possible, when we know they have a place to go,” Gribner said.

“We’re okay with that”

One tool available to help facilitate this may be the just-passed State Supplementary Budget funding, which includes $45 million to create outreach teams that connect with people camping on WSDOT rights-of-way. and help them develop a plan to move into a shelter and services.

It’s one element of a massive increase in funding aimed at reducing homelessness and expanding affordable housing across the state. The outreach project is not intended as a simple sweep, but an effort that ensures people are ‘moved’ off public property and into housing.

“It’s not just about shutting down camp,” said Lisa Brown, director of the state Department of Commerce, speaking generally about the program and not specifically about Camp Hope. “It’s: ‘How can the people in the camp be moved to better conditions?’ ”

Camp Hope persisted because there simply weren’t better circumstances. Gribner said his agency was not equipped to handle such an encampment, but plans to remove people have been repeatedly abandoned in recent months due to insufficient shelter.

As soon as there is room, however, the camp will have to leave.

“And we’re okay with that,” said Garcia of Jewels Helping Hands, who praised the agency for its patience. “They were incredibly understanding. They could have kicked us out on the first day.

Garcia has been lobbying City Hall to do a better job on this issue for years.

Meanwhile, a group of downtown business owners are exerting another kind of pressure on City Hall – one focused primarily on treating homelessness as a blight and crime issue, attacking the city council for preventing the police from solving the problem and loudly opposing the expansion of services.

After months of conducting their own private study, this group, which calls itself Hello for Good, seems to have moved on.

He recently sent city officials his ideas for solving the problem and a consultant’s report, which included a wide range of proposals.

While the focus continues to be on how the issue affects people who are not homeless, it also includes recognition that more services are needed, including additional shelters, outreach teams and treatments for behavioral health and addictions, as well as improved coordination of the current system.

Garcia – who has long been on the opposite side of that group – now says they’ve come up with a positive plan.

Hoping for an ending?

The City of Spokane has issued a request for proposals for an operator for a 32,500 square foot low barrier overnight shelter with 250 beds and capacity to shelter more if needed.

The RFP, which does not identify a specific property, also states that the property will provide daytime services, such as bathrooms and showers, meals and access to a range of services.

Brian Coddington, spokesman for Mayor Nadine Woodward’s administration, said the city isn’t ready to make announcements on a location, but hopes to be able to do so in the near future.

Such proposals are often extremely difficult to finalize, because they involve different parties and interests, and because there are so many challenges associated with opening a new shelter.

Garcia worries that a large warehouse might not be the right solution for some people camping, or that it might come with cuts elsewhere in the system. She will offer an alternative or complement to the city, she says, based on the use of pallet shelters, which look like mini-houses.

Meanwhile, hundreds of people are living in tents and vehicles at Camp Hope. It’s not some sort of solution. It is the tangible and visible proof of a lack of one. If there’s something in the offing that would give people there somewhere to go – rather than just being asked to leave – then that would be real progress.