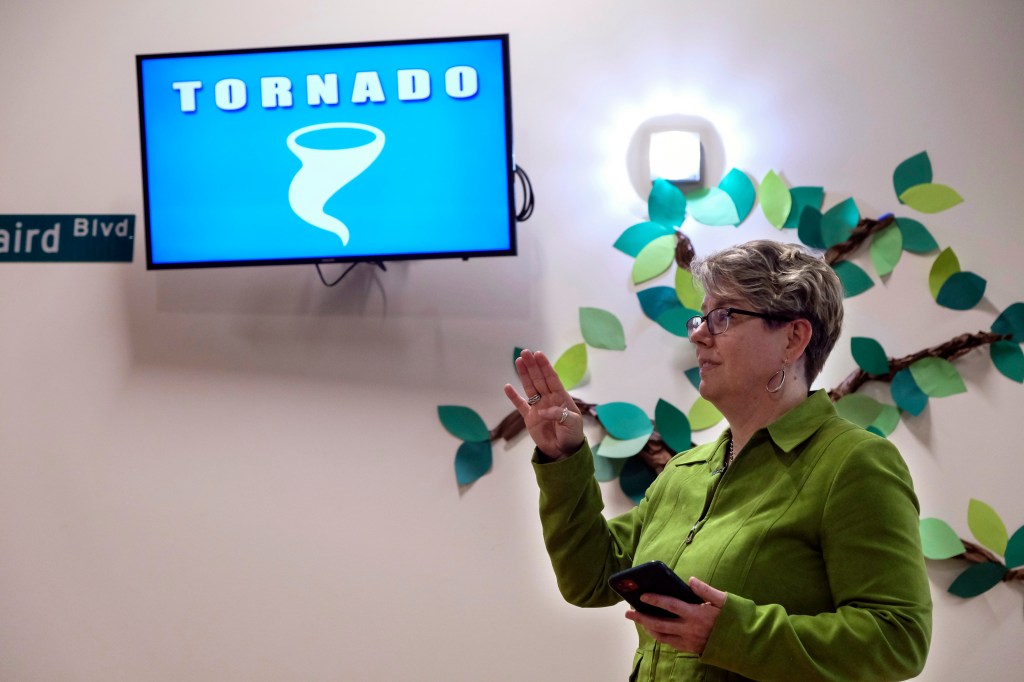 In most schools, students are notified of a fire drill by an alarm bell. To practice lockouts, there is an announcement on the PA system.

But what happens in a school for deaf students?

A St. Paul school has implemented a color-coded visual alert system and it has components that all schools could learn from, a state official said.

As students in Minnesota have recently returned to school or are about to do so, safety is on the minds of administrators, staff and parents.

More than 90% of 11th graders in the state said they felt safe at school when they responded to the 2019 Minnesota Student Survey, the most recent data available in the state.

In the United States, 44% of parents with a child in kindergarten through 12 said they feared for the safety of their oldest child at school, according to a poll conducted by Gallup in August. This compares to 34% in 2019.

“There is now tremendous pressure on school administrators to reassure parents, and that reassurance factor has accelerated significantly not only for school officials post Uvalde, but also for law enforcement,” said Ken Trump, president of National School Safety and Security Services, an Ohio-based consulting firm.

Some school districts may respond by implementing more visible measures — such as cameras or metal detectors — as administrators can show parents, “See, we’ve tightened security here at school,” he said. Trump.

However, Trump said many of the best school safety measures are invisible or less visible, including having good relationships, so kids know they can come forward if they see a problem; practice basic lockdowns and evacuations at different times of the school day; and threat assessments.

The School Safety Center is a non-regulatory program within the Homeland Security and Emergency Management Division of the State Department of Public Safety. Its staff works with hundreds of public, private, charter and tribal K-12 schools, educators and law enforcement across the state each year.

Metro Deaf School moved into its building on Energy Park Drive near Lexington Parkway in January 2019 after outgrowing its former location on Brewster Street off Snelling and Como Avenues. The building is 63,000 square feet, about 20,000 square feet larger than the last school. This is the school’s fourth location – they started in 1993 in a small space in downtown St. Paul with 14 students.

The charter school now serves over 130 deaf, hard of hearing, or deaf-blind students. Students come from all over the Twin Cities metropolitan area and western Wisconsin.

The school served K-12 students, including opportunities for high school students to earn college credit through their coursework. This school year, they’ve added infant programs to kindergarten students “because language is critical and plays a critical role in their development,” principal Melissa Sweetmilk said.

Outlaw said she was happy to see new students coming to school.

“We have kids who have never been to a slumber party because they don’t have other friends who look like them or they’ve never been invited to a birthday party,” he said. she declared. “…It’s nice to see that they come here and see that they’re like everyone else. … The academic part is important, but the socio-emotional part is just as important.

The school employs teachers who are licensed to teach deaf and hard of hearing students, and approximately 75 school staff members are deaf themselves.

Before the Metro Deaf School moved in, the building had an open workspace with booths and high-tech equipment. The school’s renovation and the construction of classrooms “changed it dramatically” on the inside, Outlaw said.

A deaf architect worked with hearing architects to think through the design of every corner and area of ​​the school.

Some of the school’s features include wide hallways that come in a curve instead of a corner, allowing more sightlines for American Sign Language; let in more natural light, which is easier on students’ eyes and minimizes eyestrain; and “Exit” signs lit not red, but green, which is easier to see for people with visual impairments, Outlaw said.

The school’s security alert system is color-coded to show what’s happening on large monitors placed in classrooms, hallways and common areas – for example, if a staff member triggers a drill of tornado, the screens of the monitors turn blue, the image of a cyclone is seen and the word “TORNADO” is at the top. The screens turn red in the event of a fire, purple to clear the corridors in the event of a medical emergency or yellow in the event of confinement.

Because the screens are used to display routine messages throughout the school day – like the lunch menu or congratulating the football team on a win – there is a system of strobe lights in hallways and halls. class to attract the attention of students and staff.

“That’s how the kids would know ‘You have to watch’ (on a TV screen) because the strobe lights don’t turn off for any other reason,” Outlaw said.

There are also color coded lights in restrooms, storage areas and small offices to use for drills or in an emergency.

The school’s old location also used a lighting system, albeit only two colors, for emergency alerts.

Using a visual system could be useful in any school with crowded and noisy spaces – such as lunchrooms, gymnasiums or music rooms – as it can be challenging for students and staff to hear an alarm or public address announcement about an emergency, said Randy Johnson. , director of the Minnesota School Safety Center.

Some schools have incorporated visual signals or flashing lights to indicate that important safety announcements will be given, according to Johnson.

The visual alert system is useful for children too young to read and students learning English, Outlaw pointed out.

ANYONE IN THE SCHOOL CAN PRESS THE BUTTON TO LOCK

In some hallways there are red emergency buttons that anyone in the school, including students, can press if a lockout is needed.

“Our deaf kids are very visual and they see things,” Outlaw said. “…If someone brings in $20 that they’re not supposed to have here at school, they know it before the teachers know it. I feel like kids know, and I think hearing kids know too.

Outlaw said they didn’t have to use the buttons except for testing, and there were no instances of students pushing them for a false alarm.

“What’s unique is that this is an expansion of what we’re training across the state, as some schools are still in a mode where only an administrator can put a school on lockdown. “, Johnson said. “We encourage staff members, any staff member to be able to do this. But here in this school they have even developed enough for the students to do it, which is exceptional.

Under Minnesota law, all schools are required to have at least five lockdown drills, five fire drills, and one tornado/severe weather drill per school year.

The Minnesota School Safety Center has these tips for parents or guardians for the new school year: