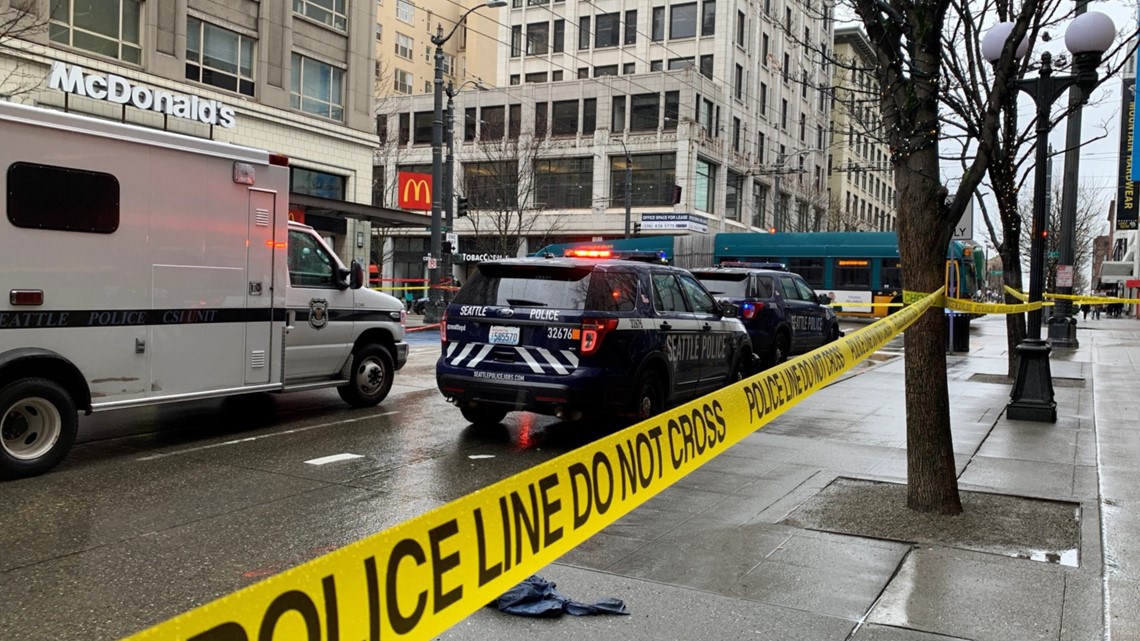 Officers say the suspect is linked to multiple robberies in and around Seattle, including one where a bank worker was shot dead in the SODO neighborhood.

SEATTLE — Marcus D. Chaney, 44, was arrested Wednesday in connection with a deadly shooting on Third Avenue and Pine Street as well as a bank robbery in the SODO neighborhood last month, according to the Seattle Police Department ( SPD).

Chaney is also facing an earlier charge of first-degree larceny related to a robbery at a pottery store in Lake Forest Park in January.

During his arrest, officers recovered eight firearms and a bag of suspected fentanyl. SPD officers, members of the FBI and the US Marshals Service arrested the 44-year-old man and took him to King County Jail.

Chaney has been involved in a series of robberies and shootings in the Seattle area over the past few months.

Chaney is believed to be linked to an armed robbery at Mr. Greens Cannabis in Lake Forest Park in January. He was identified by a fingerprint left on a trash bag left behind by one of the suspects during the store robbery. He was positively identified in security footage by a law enforcement officer who had previously interacted with him, according to charging documents.

Chaney also allegedly stole a KeyBank in the SODO neighborhood of Seattle on February 11, shortly after 1 p.m., in the 1900 block of First Avenue South.

During the robbery, Chaney allegedly shot a 34-year-old bank employee, who was taken to hospital in stable condition.

The Third Ave and Pine Street shooting took place around noon on Sunday, February 27. Officers found a man with gunshot wounds in the 200 block of Pine Street. The victim died at the scene.

Chaney was allegedly filmed arguing with the victim before the shooting. CCTV footage captured a suspect, later identified as Chaney, shooting the victim a total of three times, according to court documents.

Chaney was arrested and charged with first-degree robbery related to the Mr. Greens Cannabis incident on March 22.

Chaney also appeared in court on Wednesday where a judge found probable cause on one count of second-degree murder and one count of unlawful possession of a first-degree firearm related to the fatal Third Avenue shooting. and Pine Street in February.

The SODO theft case has not yet been referred to the King County prosecutor’s office, according to communications director Casey McNerthney.

McNerthney said cases involving shootings are brought before a judge as quickly as possible.

“In all the cases that have been brought to us recently for shootings in Seattle, we have immediately charged those cases and when we have the evidence to do so, we go before the judges and argue that people are a danger,” said McNerthney.

“Certainly when you have an individual with a gun who shouldn’t have one in Third and Pike or anywhere in the city, that’s a concern and we’re going to go to the judges and present evidence to say “We need accountability here,” he said.

The fatal shooting on Pine Street near Third Avenue was one of two unrelated fatal shootings in the area, the other occurring less than a week later, killing a 15-year-old.

The shootings and other criminal activity led the SPD to increase its presence and establish a mobile neighborhood near Third Avenue and Pine Street, a strategy the department says has successfully curbed criminal activity elsewhere. hot from the Little Saigon area.

However, a number of businesses have closed in the area due to increased shootings and other criminal behavior.

On Tuesday, acting SPD leader Adrian Diaz outlined the department’s strategy in the coming months to restore its ranks and evolve to deal with the rise in violent crime across the city over the past two years.

Along with increasing the number of uniformed officers, Diaz hopes the department can also rebuild relationships with the community.