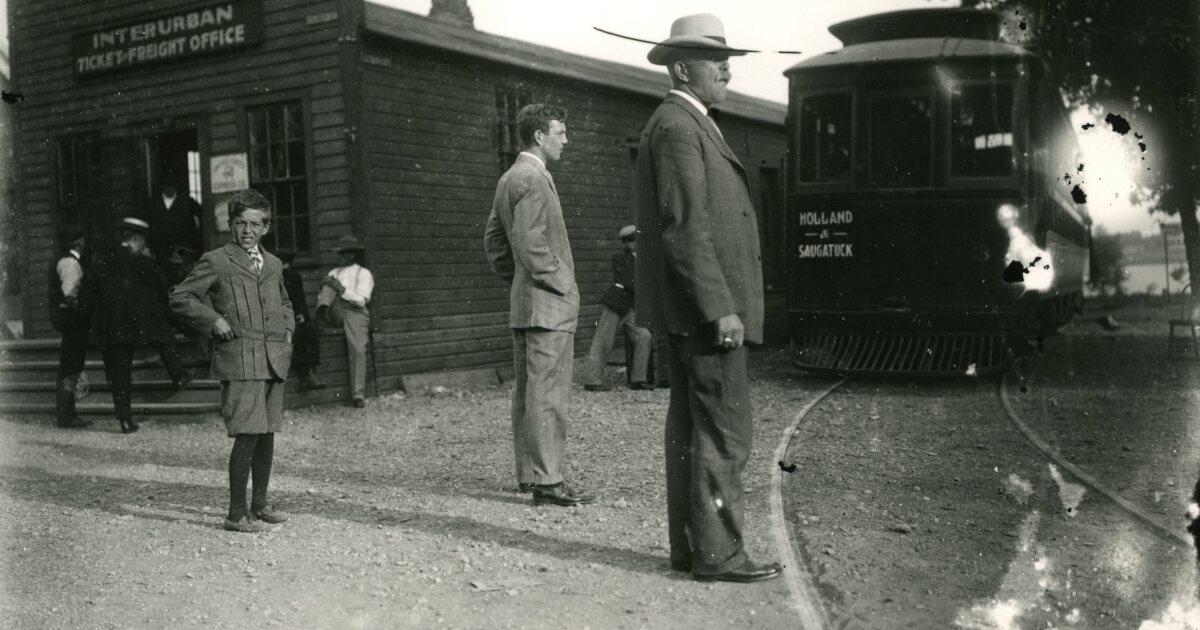 Imagine a series of regional electric rail systems that enable convenient and environmentally friendly train travel between key points in Michigan. It may sound like a vision of the future, but it’s a story about Michigan’s past.

Grand Valley State University recently installed an outdoor exhibit on its Pew Grand Rapids campus to detail the history of West Michigan’s intercity railroad system, which was established in the 1890s.

Nathan Kemler is the Director of Galleries and Collections for the GVSU Art Gallery. Matthew Daley is a professor of history at the university. Kemler and Daley worked on the outdoor exhibit and spoke with Michigan Radio’s morning edition about the project.

“The technology of the future”

In the late 1800s, very few people owned cars. Local travel often involved horses. Most of the roads were dirt. There were traditional trains, but Daley says there was also enthusiasm for the possibilities of electric power.

“Electricity was the technology of the future, and it was just coming of age. People saw it in their homes, and it was this kind of amazing technology that [today] we really take for granted,” Kemler said. “Part of the idea was to start a railway in Holland and interconnect with a tram system, but then reach out to growing industries. It’s really connected [the Lake Michigan] shoreline with its tourism, with its hotels, with the maritime traffic to Chicago.”

The intercity was more nimble than the region’s traditional rail lines and cleaner.

“Their power plants created coal smoke, but you don’t get dirty when you ride [interurban trains], and they could also carry cargo. There was direct competition with the traditional railroads: the Pennsylvania, the New York Central, the Michigan Central,” Daley said.

The growth of long distance systems

Daley noted that western Michigan wasn’t the only place in the state with a long distance system.

It’s one thing to lay hundreds of miles of track for a traditional train with self-powered cars. But creating an electrical system for trains in the 19th and early 20th century could be difficult. Streetcars in cities ran on electric wires, as did the route from Grand Rapids to Holland, but designers relied on other methods as well.

“When you left the city limits, they had a third rail system just like a subway, and one of the challenges was that they had to plow [snow off of] the lines. They had endless problems with fences and animals roaming the tracks, getting electrocuted,” Daley said. “But it was considered the most effective and the least susceptible to wind damage, which is what we are still struggling in the present. .”

In an article promoting the facility, Kemler wrote that the Interurban was an “early and sustainable method of transportation rooted in fairness.” Prices have fluctuated, but a trip from downtown Grand Rapids to Lake Michigan costs about $5 in today’s money. Not cheap, but not out of reach either.

Nathan Kemler, Director of Galleries and Collections at GVSU

Daley noted that the system was not officially separated.

“I imagine they were largely following the same kind of cultural practices that were prevalent around the turn of the century, but I have images of integrated passenger travel. And there were African-American freight workers on the system long distance,” he said. .

The decline of long distance

After a good start, intercity traffic declined rapidly in the mid-1920s. It is no coincidence that Henry Ford’s Model T was already very popular at that time. But it wasn’t just the loss of passengers that hurt the private companies that owned the various systems across the state.

“Once ridership starts to decline, it really puts a strain on the whole system. Freight [also] are moving further and further away from the system. Freight work in the various factories and companies actually subsidizes passenger traffic. And once you start losing that, you start having this fundamental tearing of finance,” Daley said.

“Americans really chose automobiles. My students often see it as a sort of conspiracy that [General Motors] took [the interurban trains] outside. And my answer is: ‘No. We loved cars'”

Daley noted that the rise in popularity of the automobile created other problems for electric rail systems.

“In 1919, the gas tax will be put in place to improve road construction, and public policy really favors the financing of roads for private vehicles, and certainly was not going to give money to a network private long distance that was increasingly seen as something of the past,” he said.

Remembering and Looking Ahead

Today, there is still part of the original track, approximately 100 years old, in the ground at the site of the new exhibit in Grand Rapids. Both pieces are between 8 and 10 feet long. Daley and Kemler believe these are the last remaining intercity tracks in western Michigan.

“They’re in the bricks, down the road they were originally on. When Grand Valley started this project to turn Mt. Vernon Street into a pedestrian mall, Father Dennis Morrow, [a former] parish priest of Saints Peter and Paul [in Grand Rapids]wrote a letter and said, “Please consider saving these tracks. These are important to our community,” Kemler said.

The installation on the GVSU Pew Campus comes at a time when many people are thinking about climate change and reducing the use of fossil fuels. Automakers are unveiling all kinds of new electric vehicles.

Kemler and Daley said the long distance story is an eye-opener for GVSU students concerned about the future of the planet.

“Most students are amazed. They tend to think about [electric transportation] as a more modern phenomenon, that this is a whole new innovative technology that we are still developing,” Kemler said.

“That is, in part, why this story is so important for our community to understand. We are continuing this narrative. We are drawing on past knowledge and experience and learning from the past, just as much as we learn by looking forward. future and taking risks and being innovative.

Lauren Talley contributed to this story.

Editor’s Note: Quotes in this article have been edited for length and clarity. You can listen to the full conversation at the top of this page.