The streetcar through downtown Seattle is a smart investment 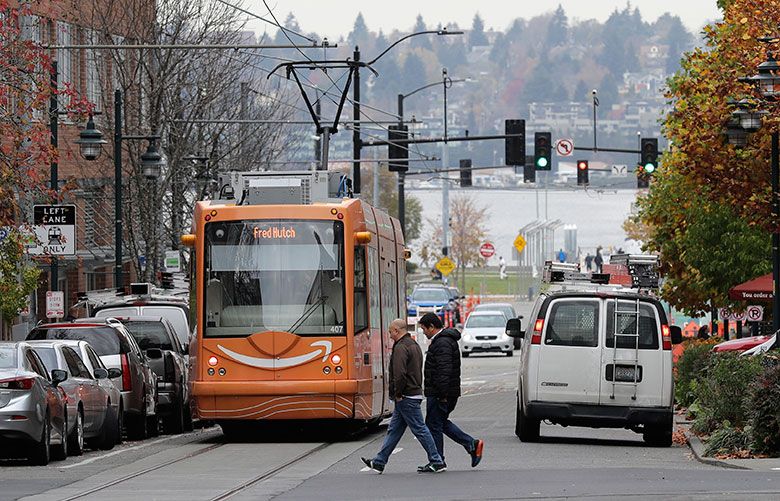 The streetcar will create useful new connections within the downtown transportation system, integrating with light rail, buses, ferries, and Sounder and Amtrak trains.

People have spoken: whether they currently use public transit or not, they want more; they want it in reserved lanes; and they want the Center City Connector light rail. Like a recent Seattle Times Poll confirmed, despite recent uncertainties about the future of this key project, the public appreciates its merits. Mayor Jenny Durkan made the right choice by moving the tram forward.

Dedicated transit lanes on First Avenue will make the new streetcar line fast and reliable. Additionally, it will create a connected system that will allow the two existing lines to reach their full potential, triggering massive ridership growth. The city’s independent consultant has predicted that a connected streetcar will attract around 23,000 daily riders in its first full year of operation, more than Metro’s top-performing bus line.

Tram lines serve the fastest growing part of the city. Since 2010, areas along this route have added over 43,000 new residents – a 66% increase – and have seen a 27% increase in employment. These trends require additional transit capacity to move more people downtown. The Downtown Light Rail will provide just that, and a decade sooner than the second Downtown Light Rail Tunnel, which will arrive with Ballard Link in 2035.

Do you have something to say?

Share your opinion by sending a letter to the editor. Email [email protected] and please include your full name, address and phone number for verification purposes only. Letters are limited to 200 words.

Connecting the two existing light rail lines delivers on promises made to neighborhoods such as Chinatown-International, whose residents and small businesses were promised a downtown connection when they agreed to disruptive construction in 2012. First Hill was also promised a tram connection through the city centre. when Sound Transit was unable to deliver a Link Light Rail station as part of ST2. Connecting these neighborhoods to Pike Place Market will boost local businesses along the line.

A completed light rail system will also touch a culturally and economically diverse section of the city and serve more than 10,000 new affordable housing units along the line completed by 2025. The more than 7 million annual passengers expected from the trams will include locals and tourists dependent on public transport.

The streetcar will create useful new connections within the downtown transportation system, integrating with light rail, buses, ferries, and Sounder and Amtrak trains. By funneling transit riders to more places without inconvenient transfers or climbing steep hills, it will make getting around easier, especially for people with reduced mobility.

Bringing our diverse transportation infrastructure together into a cohesive whole and making public transit accessible and useful to many more people have been key demands from United Advocates like the Move All Seattle Sustainability Coalition (MASS). MASS advocates for more bus-only lanes, bike lanes and signal priority to get people through on foot, by wheel and by transit at intersections.

The MASS coalition also wants to ensure that these modes of transport are mutually supportive. We expect tram tracks to be carefully designed to ensure the safety of people cycling and riding along or across the tracks. Safety and interconnectivity are crucial elements of a transportation system that keeps everyone mobile and moves Seattle — and our entire region — toward the urgent goal of carbon neutrality.

The Downtown Light Rail is an important step toward this vision of an equitable and sustainable transportation system that can lead Seattle into the future and meet our aspirations to be a leader in climate action. The public supports him. Studies show that this is a valuable project. Let’s build it.