What it’s like to use DART’s new bus system 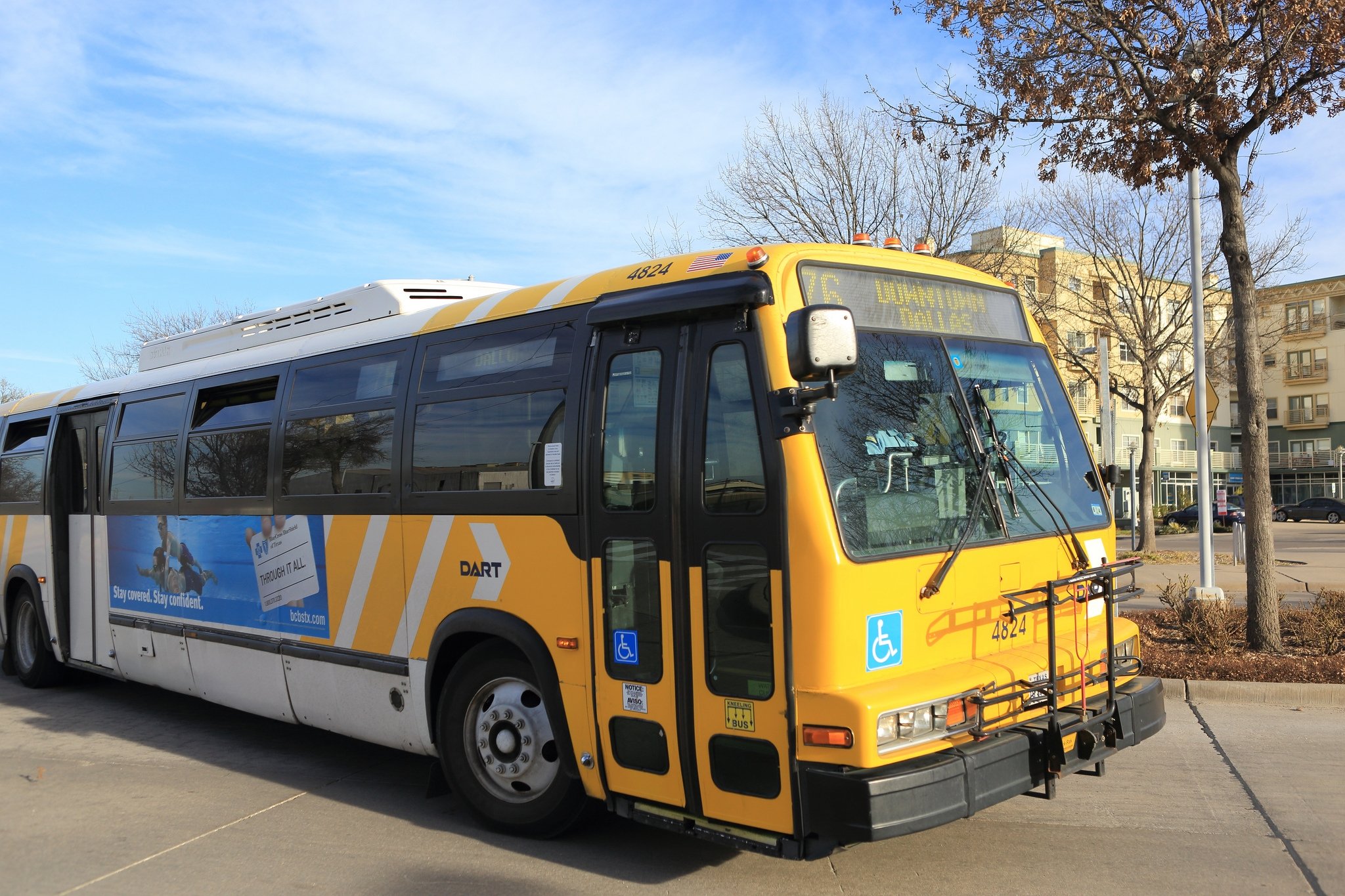 People often say that a good measure of a city’s humanity is the success of its public transit. This kind of thinking is the reason why every time I visit a new city, I take the bus or the train at least once. And most of the time when I come back to Dallas, I’m disappointed. Nothing snaps me back to reality faster than getting off a plane and then taking the Dallas Area Rapid Transit for an hour ride from DFW to my apartment.

DART rolled out its new bus network last Monday, bringing more buses to its busiest lanes. The trade-off for passengers is that you may have to travel a longer distance to a bus stop, but your bus is more likely to arrive on time. DART cut some routes to put more buses on 22 base frequency routes, which run every 2o minutes at noon and 15 minutes during peak hours.

There seem to be more buses on many routes, but the frequency is still not where I feel comfortable making stops along my route. It’s always a gamble to get off the bus and have an errand when you have somewhere to be at a certain time. But overall it took less time to get where I needed to go.

The unspoken rule of public transit is that you don’t talk to your fellow riders. As unfortunate as it may be, putting on headphones and minding your own business until your stop comes in handy, it doesn’t matter if you’re using DART or MTA in New York. But in the past week, the otherwise static energy on the buses has given way to more people talking to each other, asking other riders and conductors where this bus is going, or where they can connect to reach any destination. The new route numbers have caused a lot of confusion, even among people who are happy to see more frequent buses along their routes.

Allecia Kimble was waiting at the Garland transfer station on Sunday. She’s been using DART for two months, and when the new routes went live last week, she noticed some bus stops still had the old numbers on route markers and signs.

“It’s hard, though, trying to figure out which bus is for whom. [route],” she said. “Things like that make it hard for new runners to come in and try to figure out where they’re going.”

She makes a crucial point. If DART hopes to attract new riders, which equates to agency survival, it will need to make navigation as easy as possible.

I experienced some of the confusion in the signage last Thursday evening. After taking the escalators from the bottom of the Cityplace/Uptown station, I waited outside on the 23rd towards the MLK Jr. station. There was just enough time between the train and the bus for me to could see three jets making slow final approaches over Uptown towards Love Field. I was getting hungry and figured I’d make the quick trip down Haskell Avenue to grab a burger at the Old East Dallas bar, the Peak Inn, which also happens to be located across from the East Dallas DART garage.

The GoLink app, which is a key method for tracking bus arrival times and planning trips across DART’s network, showed 23 to MLK arriving at 7:06 p.m. And when the bus arrived at said time, I saw it was the 23rd and jumped on it. The bus took a left at Haskell and drove into Uptown, the opposite of Old East Dallas. The on-board screen that shows the route and upcoming stops was not working. Hungry and confused, I got off the bus and called an Uber. Not all runners have this luxury.

Hiccups like that weren’t uncommon. But Kimble’s words once again brought me into focus. One of DART’s big promises with the new network is that it will provide a better experience for those who use it for work, play and errands.

“It’s much easier for us people who have to take the bus to work,” she says of the new network. “It’s much more efficient. Instead of making you walk five minutes to the next stop, they stop where you just have to cross the street.

DART staff informed board members that traffic on its network increased 10% last week, said Patrick Kennedy, one of the Dallas representatives on the DART board. But this increase does not necessarily reflect new runners testing the network. (And, admittedly, this is a small sample.)

Kennedy said it was too early to tell, in part because DART made its buses free for two weeks. This, he says, inevitably attracts people who otherwise wouldn’t use public transit.

The 105 to downtown is the line I use the most. As he waited for a red light to turn on Live Oak Street one evening during rush hour, I began to notice one thing that hadn’t changed at all: our bus was surrounded by personal vehicles. A three-lane road full of vehicles and a single bus, which is already a few minutes late, with just a handful of people on board. (Give meaning.)

Even with a more efficient network, bus and train riders can still arrive at their transfer point and be momentarily stranded to find that the bus they were trying to get on has been cancelled. I experienced this when I rode the 09 to the Cockrell Hill pickup location via Jefferson Boulevard last Friday. I was hoping to catch the 226, which would have taken me further into the surrounding neighborhood. I arrived at the transfer location and checked the app to find the next two canceled 226s, leaving a window of over 30 minutes until the next one.

In this situation, I could have hailed a GoLink bus. DART’s redesign was meant to be budget neutral, which is jargon for “can’t spend more money than it currently does”. This led to the agency eliminating some routes and replacing them with its on-demand service called GoLink.

The agency likens it to taking public transit on Uber or Lyft. DART now has 30 GoLink zones, an increase from the previous network’s 17 zones. There is still a problem with GoLink: 13 zones work on Saturdays, with only six working on Sundays. DART CEO Nadine Lee touted the new bus network as a beginning rather than an end, in part because of issues like these. He will need more money to achieve all of his goals.

DART has an obligation to build and maintain efficient public transit systems that work for all kinds of people. But it’s not enough for transit agencies to do all the heavy lifting. The mayor, city council members and county commissioners should listen to DART’s progress and plan to allocate funds to fix broken sidewalks and make other improvements. Good public transport cannot be achieved without the creation of infrastructures that facilitate our lives, or at least our movements. Especially when runners have to walk further to catch a connection.

I also believe that when it comes to public transit, there is also an obligation on the part of citizens. Society extends from your homes to sidewalks and under bus shelters. Come sit next to us, watch on the GoLink app as your bus arrival time continues to increase, and feel the impact of congested streets.

Now is the perfect time to do it. Learning about these new routes gave me an unexpected opportunity to get off my main routes and get around Dallas in new ways, getting off one bus and picking another for fun, to see where it takes me. New lanes, new restaurants and stores, and new facets of Dallas have already emerged.

The people who depend on these buses have made sacrifices in their daily lives because our public officials hope more people will get on a bus and see that even a sprawling place like Dallas can have a decent public transit system.

An elderly Oak Cliff woman I met at Mockingbird Station declined to give her name, but told me she now feels disconnected from her neighborhood. More and more bus routes snaked around where she lived, giving her more choice when she needed to go somewhere. Now there is only one, which forces him to walk longer to the nearest bus stop. The frequency, she says, is excellent.

“But where you have to go to catch the bus is the problem,” she said.